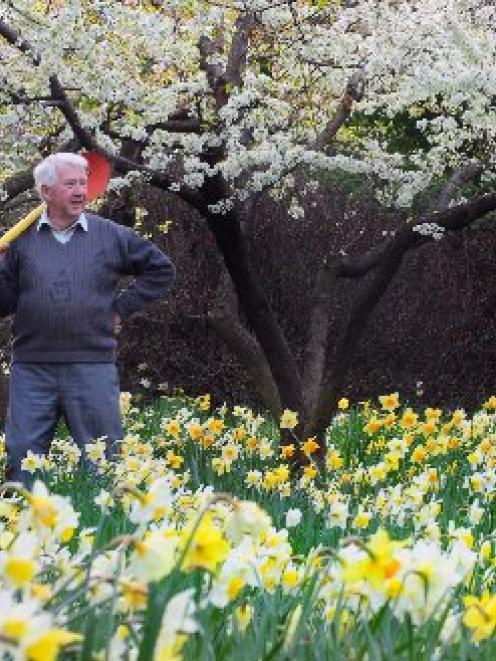 Les Cleveland in a daffodil block at his home "Cleveland Park", on Saddle Hill. Photo by Craig Baxter.
The man responsible for giving more than two million daffodil bulbs and 8000 rhododendrons that grace many of Dunedin's public spaces has been named as the Otago Gardener of the Year.

Les Cleveland said yesterday he was honoured to be selected for the regional award, but felt it really belonged to the people who worked to keep his large garden going.

At "a few months" off 80, the conservationist, plant philanthropist and gardener, now left most of the work in his and wife Margaret's garden to two full-time workers.

However, a life-long love of plants meant he was never far away.

The former businessman, regional councillor and opera singer said he inherited his father's passion for the daffodil, but also confessed to a love of every plant on this good earth, even the gorse.

"When you look at plants and work with plants, it gives you a sense of joy."

He grew plants because he wanted to make sure something that was slowly being lost from the world in other places - vegetation - would at least remain in his patch.

On their 100ha Saddle Hill property the Clevelands have an extensive garden around their home, as well as blocks of daffodils and smaller native plantings interspersed with blocks containing families of trees, including at least one of every type of New Zealand beech, eucalyptus, kauri, maple, rata and protea.

The blocks were registered under the QEII National Trust, so there was a covenant on them, meaning they would exist in perpetuity, even if the property was sold.

When they arrived there 26 years ago, the whole place was covered in gorse, Mr Cleveland said.

He was driven by a desire to future-proof plants.

"I watch people slowly but surely raping and destroying the vegetation of the world and I realise that humans need to have a long-term vision of what we are doing to the planet."

The editor of NZ Gardener magazine, which runs the awards, Jo McCarroll, said it was hard to comprehend the scale of what Mr Cleveland had done for Dunedin and Otago.

"So many beautiful spaces in the area are the result of his hard work and generosity.

"It's something that will have touched the lives of most of the residents and yet Les has never sought recognition for what he does.

"He's just happy to share the flowers he loves."