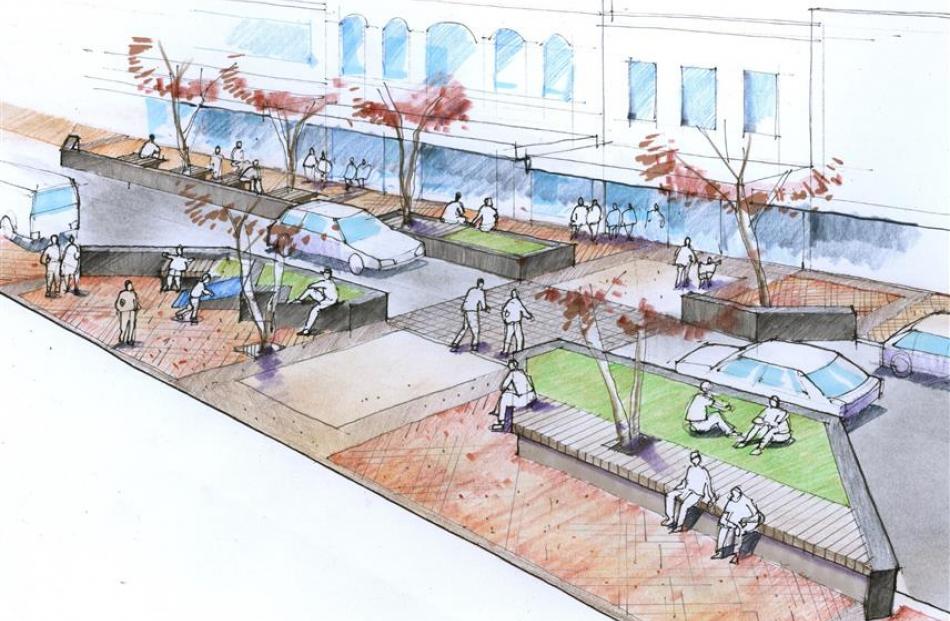 A design for the proposed inner city refurbishment. Image supplied.

Dunedin City councillors agreed to delay a multimillion-dollar central city improvement programme by a year, giving staff more time to get it right.

Councillors also voted to allocate $250,000 for the 2016-17 year from the existing transport budget towards developing a plan for the programme, which had previously been given a cost of $37.1million.

A report from council staff essentially gave councillors no choice but to delay the project, saying returning to the previous timeframe would not be possible given the amount of planning required.

Without the delay, there was a risk of the council launching into work on George St without support from business owners, Mr Cull said.

In response to questions from Cr Aaron Hawkins, water and waste group manager Laura McElhone said the delay could be more than a year.

Coming up with a "robust plan'' would take a lot of work and there was concern this would require a "slightly longer delay''.

However, until a programme manager was appointed and work was started to develop the plan, the time frame would remain unknown.

"It's absolutely vital that if we are going to regenerate the central city ... that we do get that underpinning work done and don't rush ahead of ourselves.''

Council infrastructure networks general manager Ruth Stokes appreciated plans had not progressed as quickly as people would have liked.

"But we know we have a greater understanding, and a shared understanding across the organisation, of what it's going to take to deliver.

"You will see a step change in progress from here,'' Mrs Stokes said.

Cr David Benson-Pope asked if the idea of having a targeted rate for central city businesses to help pay for the improvements was being looked at.

Dr McElhone said this discussion was a "long way off'', as the cost of the programme was a long way from being determined.

Cr Hilary Calvert said the delay represented an "exciting opportunity'' for the council and businesses to get on the "same page'' when it came to central city improvements.