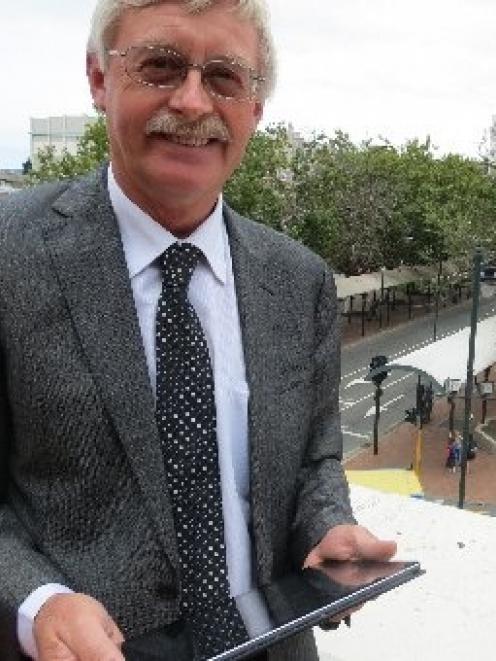 Digital Community Trust chairman Chris Staynes believes winning the Gigatown Competition could be a game changer for Dunedin. Photo by Jonathan Chilton-Towle.
Becoming the first city in the country to have a gigabit-speed internet connection could be a welcome fillip for Dunedin's economy.

The Gigatown winner will be the first town in the Southern Hemisphere to access a one gigabit per second (1Gbps) internet connection which is tipped to be a major drawcard for business interests looking to set up shop, and a major boost to existing organisations.

The current average New Zealand broadband speed is 10Mbps (Megabytes per second) and this can be increased to 100Mbps by connecting to the new ultrafast broadband (UFB) network Chorus is rolling out.

The winning town would blow even the UFB speed out of the water with connections of up to 1000Mbps (1 gigabyte) available.

If Dunedin won the gigabit, connections would be available in 2015 at the earliest, although some areas would not be able to access it immediately as they would not become part of the UFB network until 2016.

Any home already connected to the UFB network would be able to discuss switching to the faster connection with their provider immediately.

Those not connected to UFB would need to get a connection to the network before they could use the gigabit internet.

It was also available in a few outlying areas, such as St Clair and parts of the Kaikorai Valley and Mosgiel. The plan is to connect the rest of the city by June 2016.

Schools and hospitals would be the first big winners, as they were already connected to the UFB network as a priority, Mr Dow said.

Wholesale prices of 1 gigabit connections for residential users in the winning town would be $37.50. For businesses the wholesale price would be between $50 and $80.

While it was up to individual internet providers to set their prices, the transparency would ensure the low wholesale prices translated into low retail prices, he said.

Mr Dow predicted residents in the winning town would be looking at paying between $75 and $100 per month for the 1-gigabit connections.

''It would be a catalytic event that would help Dunedin's economy gain momentum.

Gigabit speeds would provide opportunities for innovation and development in the health, education, design, and niche manufacturing sectors.

This will attract investment into Dunedin and in turn talented people to live and work here because they can work globally and enjoy the great lifestyle.

''It is an amazing opportunity to make Dunedin the most connected city in the southern hemisphere. Surely that would drive innovation and attract businesses to our city,'' he said.

The council's economic development strategy already planned for the city to progress as a knowledge-based economy.

The University of Otago and Otago Polytechnic were the city's largest businesses, he said.

Many other Dunedin businesses worked through the internet, and the engineers and manufacturers were innovators.

The gigabit-speed internet would provide a massive boost in connectivity to all these sectors.