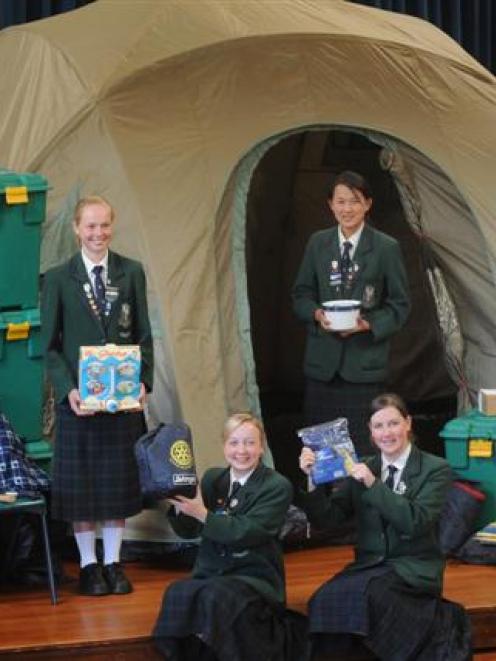 A tent, waterproof ponchos, water containers, thermal blankets, cooking utensils and tools are among the items in the transportable boxes. They are designed to provide shelter and warmth for up to 10 people for up to six months.

The school raised the money, enough for two boxes, over one year through their sponsorship programme. Every week, pupils brought a donation for the nominated charity, school council president Lucy Kent (17) said.

It was the previous school council's decision to support ShelterBox after information about the project was given to the school.

"I don't think anyone knew how significant it was [but] we are really pleased to be able to support it," Lucy said.

The school will be able to track their boxes via the internet as they are deployed around the world.

ShelterBox started in England in 2000. Since then, Rotary clubs worldwide have come on board and, as of October 2008, had responded to 76 emergencies in 45 countries, sending out more than 40,000 boxes.

New Zealand became involved in 2007 and the Rotary Club of Mosgiel "took it on" for the country, publicity manager Lindsay Thorburn said.

The boxes were made in England and deployed from Melbourne with an aim of reaching disaster zones within three days, he said.

One in every 50 boxes deployed contained enough school equipment for a year.

ShelterBoxes had been donated to Victorian bushfire victims and five of the tents were being used as a maternity suite in Nepal, co-ordinator Graham Beech said.

They both believed the project would only grow as improvements were made in technology and disasters continued to strike.

"It's a living project and will go forever," Mr Thorburn said.