A Dunedin rest-home whose residents have been delighted by the arrival of three roosters is now appealing for a permanent abode for the ''gorgeous'' big birds.

The friendly fowl have even been immortalised at the Leslie Groves Hospital in Wakari, in the form of their foot prints embedded in a new concrete path.

Their provenance was unconfirmed but it was believed the ''gorgeous, big, huge and long-legged'' trio had been dumped.

''They've crossed the road, but we don't know which road.'' 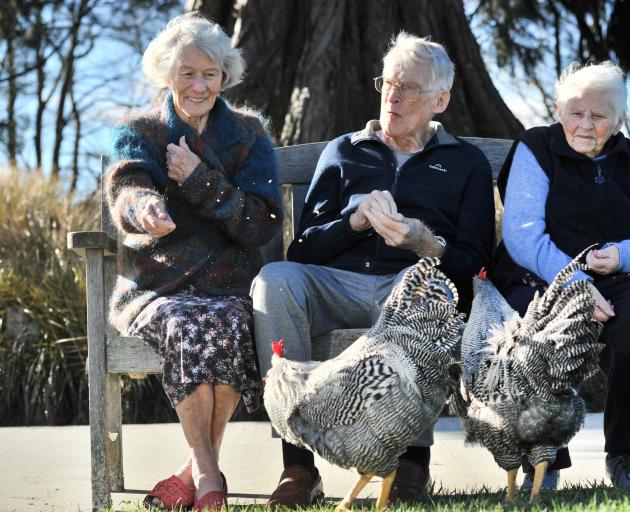 Feeding the Plymouth Rock roosters which have made themselves at home at Leslie Groves Hospital in Wakari, Dunedin, are (from left) Margaret Pennycuick (84), Grant Moody (89) and Patricia Siegle (90). Photo: Christine O'Connor
The group had mostly proved a smash hit with residents, Mr Reid said.

''They're very friendly which has been entertaining the residents no end, and scaring one or two of them, because they're almost too friendly.''

On sections of the new concrete path their large three-toed footprints had been immortalised.

''Last week we had a concrete path extended, and the chickens, well, they made a good impression.

''The concrete guys, with a little of their own whimsy, have turned it into a feature on the path, which is very nice.''

But two weeks down the track the nuisance value was beginning to outweigh the novelty, and the facility was seeking a permanent home for the plucky trio before they called the SPCA.

''If anyone wants them they can have them, hopefully as pets, rather than as dinner.''