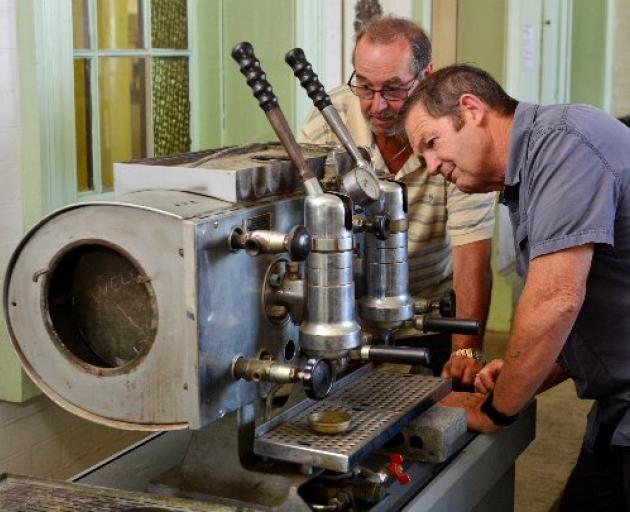 What is thought to be Dunedin's oldest espresso machine was found in a landfill and taken to the Gasworks Museum before appearing in the Otago Daily Times last week.

The 1955 La Pavoni Liliput 55 was hand-made in Milan before being imported into New Zealand to serve coffee drinkers at The Little Hut coffee bar, in George St.

From there it is thought the machine was sold to a Green Island cafe, before being taken to a landfill.

Since the ODT report, interest in the machine's fate had included a $500 donation from a coffee lover and free expertise from Dunedin coffee experts.

Machines like the Liliput 55 were ‘‘built to last a lifetime'' Mr Johnston said, and on initial inspection much of the machine was in surprisingly good condition.

Mr Smart said the 61-year-old machine would need to be completely dismantled and inspected, but that was a job he and Mr Johnston would enjoy.

From that point it could be determined how much work was needed, but Dunedin's engineering pedigree meant whatever parts were not available could probably be made in the city.

The machine did not have a great many moving parts and was ‘‘completely restorable'', he said.

Mr Johnstone said the machine would also need de-scaling and its boiler pressure-tested, but neither job was intimidating.‘‘I think she's in great nick for her age. I can't see any reason why we can't get it going. None whatsoever.''Mr Johnstone was adamant the machine could again be used to serve espresso in Dunedin.‘‘It ain't over till the fat lady sings. And she hasn't even started whistling.''

La Pavoni ‘‘Liliput 55''
15-litre two-group lever espresso machine.
Designed in Italy by Studio PFR and hand-built in Milan.
Probably imported into Dunedin in the late 1950s.
Installed at The Little Hut in George St before being transferred to a Green Island cafe.
Pulled from landfill and now likely to be restored.