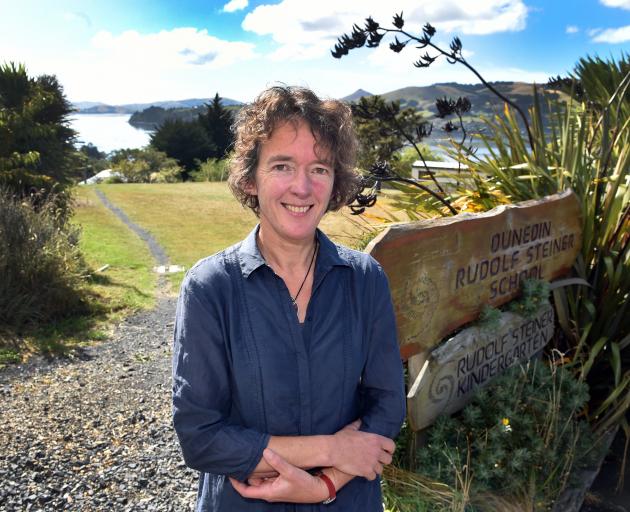 Rudolf Steiner School and Kindergarten proprietors trust executive officer and fundraising campaign co-ordinator Clare Ridout outside the school in Maia, which hopes to start building expansion work later this year. Photo: Peter McIntosh
A burgeoning roll at the Dunedin Rudolf Steiner School has prompted its board of proprietors to begin a fundraising campaign to add several new classrooms.

School proprietors trust executive officer and fundraising campaign co-ordinator Clare Ridout said the state-integrated school's roll had increased steadily from five pupils in 2006, and was now at its capacity of 64 pupils.

The school's kindergarten facility had also grown from 12 children in 2006, to about 50 children at present.

''We're very much at capacity and we have a waiting list of pupils wanting to enrol.

''We've had projections showing our roll moving up to 85 children once our cap is lifted.''

Ms Ridout said the trust would launch a campaign next Thursday at Toitu Otago Settlers Museum, in a bid to raise the $1.2million needed for the school expansion.

There are provisional plans for a two-storey block containing two classrooms, a cloakroom, toilets, a foyer and resource room in the top area of the school.

There were also plans for an extension to the main block of the existing school, which would incorporate a flexible teaching space, a playgroup room, a staffroom and toilets.

It was hoped construction could begin as early as mid-2019, she said.

The school's website said the proposed design was one that made the most of the building's position on the site, and would provide ''excellent utilitarian classroom spaces that are also beautiful and fit to last for decades to come''.

''Steiner stressed the importance of combining utility and beauty within classroom spaces and the positive effect this has on child development and on society.

''The new building will not only accommodate school classes but also free up space for playgroups on the site, and provide a venue for other community events.''