Half a century of sharing celebrated 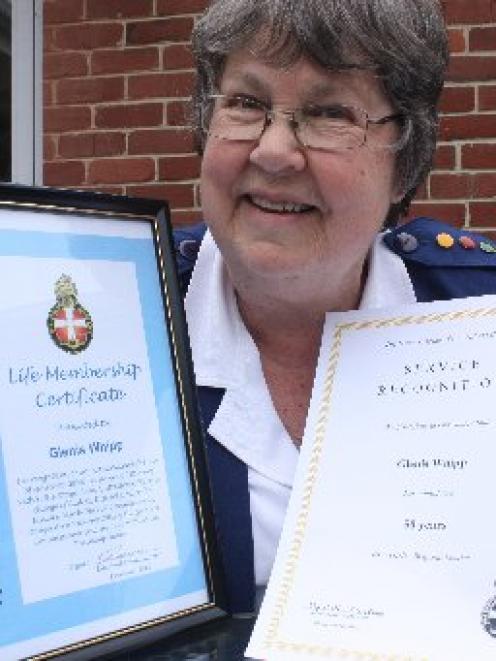 After more than 50 years of service to the Girl's Brigade in Dunedin, Glenis Whipp was honoured with a life membership on the weekend. Photo by Tim Miller.
For the past 50 years, Dunedin woman Glenis Whipp has been passing on old-fashioned skills to new generations of girls.

Since joining the Girls' Brigade as a 7-year-old, Mrs Whipp has been involved with the brigade in one way or another.

''I wanted to join because my friends were in Girls' Brigade and I didn't realise at the time it was also a church group.''

Mrs Whipp still helps with two Girl's Brigade companies as a captain and enjoys imparting some of the wisdom she has picked up.

''The thing I enjoy most is being able give my skills that I have learned during my life to the children today,'' she said.

While the style of teaching may have moved on from when Mrs Whipp first started, the skills being taught had stayed the same.

'' I quite like the craft work we do and, for me, the best part about working with the girls is showing them the skills we all used to know but for whatever reason are not being taught anymore.''

Despite a decline in the number of girls joining Girls' Brigade, young girls were still keen to learn skills and be part of a group, she said.

''I think the biggest change is we don't have adults who have the time to be leaders anymore. It's not that the girls don't want to join.''

Another change was that compulsory uniforms were no longer required but leaders still maintained a dress code.

''When I first started we had to make sure our uniforms were clean and tidy . . .

We also had to wear a hat, which has since gone out of style,'' she said.

Organisations like Girls' Brigade or Scouts and Girl Guides were still good at teaching children skills they would not learn at school and parents should take advantage of that, she said.

At a celebration of 85 years of Girl's Brigade in Dunedin celebrations on Sunday, Mrs Whipp was made a life member of the organisation.

''I knew I was going to get the service recognition for 50 years but I had no idea I was going to be given a life membership. It was a very nice surprise,'' she said.

For now she had no plans to step back from Girls' Brigade.