Half of pupils driven to school

Half of Dunedin high school pupils are driven to and from school, while 30% walk and just 1.5% ride a bicycle, the latest results from the Beats Study show.

The multidisciplinary study, which focuses on the ‘‘built environment and active transport to school’’ (Beats), has surveyed the physical activity, transportation and health status of 1800 Dunedin high school pupils during the past three years. Data is still being collected from parents.

The flood of data is being analysed by the Beats Study research team, led by Dr Sandy Mandic of the University of Otago School of Physical Education, Sport and Exercise Sciences, and is being gradually released through symposiums, reports and scientific papers.

The latest set of data was released during the second Beats Study Symposium, held last month on campus, which attracted academics from around New Zealand, along with students and the public.

The results covered a broad range of topics, including transport to school, perceptions of cycling versus walking, perceptions of routes to school and who makes the decisions. It was interesting to discover why some pupils were driven to school, some walked and others cycled, Dr Mandic said.

‘‘The responses from both the students and the parents showed that convenience is the main reason for them to be driven to school.’’

Distance to school, after-school activities and the young people having ‘‘too much stuff’’ to carry were also cited, she said.

When asked how they perceived walking or cycling routes to school, pupils raised concerns about too much traffic, too many hills, a boring route and dangerous crossings on their way to school.

‘‘The outcome was a definite preference for motorised transport.’’

The survey had also shown that both parents and adolescents played an important role in the decision on modes of transport to school. Three-quarters of parents believed it was their responsibility to decide, or in consultation with their child.

‘‘This shows why it is important to survey parents, because they are major decision-makers.’’

The survey was extraordinary, in that the researchers had been able to study pupils from all 12 Dunedin secondary schools, Dr Mandic said.

The survey had been a collaboration between the University of Otago, Dunedin City Council and the Dunedin Secondary Schools Partnership, and the results were ‘‘very applicable’’ locally.

With high levels of concern around obesity and other health risk factors for adolescents, this area of research was a ‘‘hot topic’’ internationally.

Six academics from the United States and Europe would visit Dunedin in August next year to view the study, and would form the basis of an international symposium ‘‘Active Living and Environment: Towards a Healthier and More Sustainable Future’’.

It had been difficult to access enough parents to participate in the Beats Study. The researchers hoped to reach 1000 local parents, Dr Mandic said.

The 15 to 20-minute online survey is available at http://goo.gl/aubw4u or by visiting the website otago.ac.nz/beats.

'It's a very harsh place to bring a bike to' 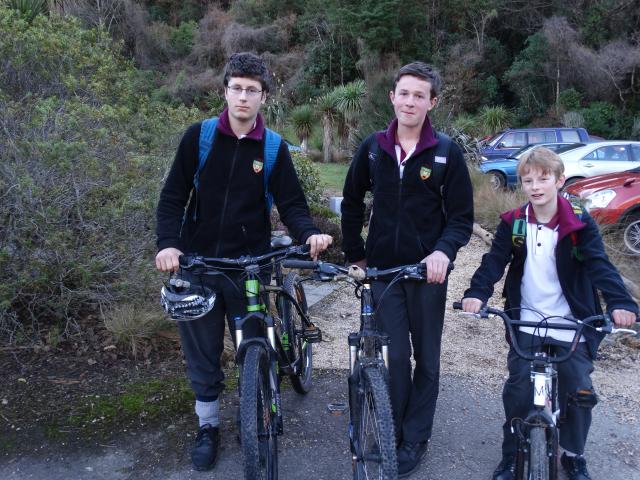 ‘‘It’s a very harsh place to bring a bike to,’’ Jane Johnson said.‘‘You’ve got lots of hills to negotiate one way or the other, if you’re coming from Maori Hill or places like that, so it’s quite a challenge.’’

The recently completed University of Otago Beats study, which researched how Dunedin school pupils travelled to and from school, found 7% of Logan Park pupils surveyed cycled to school.

This was the highest of any school in the city.

Ms Johnson said those pupils were probably a committed core who were more athletic.

So who did the dcc consult before embarking on the expense cycle way construction I have stated previously that Dunedin in general is not conducive to cycling.

Also having been one, it is easier, as a working parent , to incorporate the school run with going to , and leaving work so, no, no surprises for me in the result of this study.