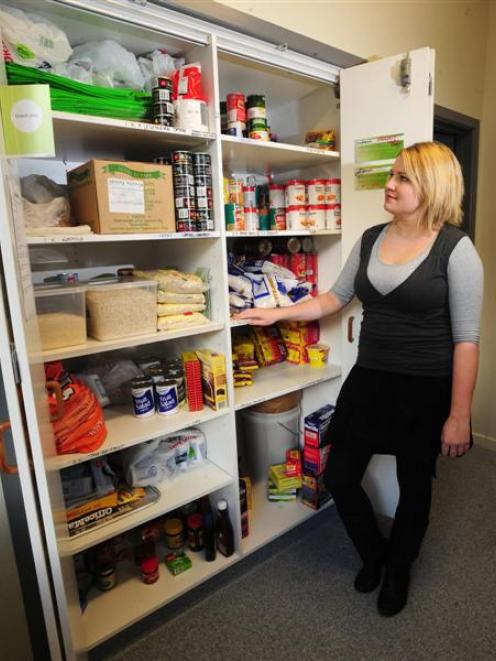 Otago University Students' Association president Harriet Geoghegan inspects the association's foodbank cupboard. Photo by Craig Baxter.
The economic recession has been over officially for a year but Dunedin tertiary students are yet to benefit. Part-time work is still difficult to find and more students than ever are seeking emergency financial support. Tertiary education reporter Allison Rudd investigates.

Think of the cost of essential day-to-day living for a typical Dunedin tertiary student - accommodation, food, electricity, transport and personal items such as clothing, shampoo and soap. Add in spending on the occasional visit to the doctor or dentist, evening out, birthday present or trip home for the many Dunedin students whose families live elsewhere.

With a room in a standard student flat costing between $85 and $130 a week, there is not much left over for the rest, student leaders say.

Unexpected bills or financial problems, such as high winter electricity bills, urgent travel or getting sick and being unable to work, can easily plunge students into financial desperation.

That was not surprising, OUSA president Harriet Geoghegan and her OPSA counterpart Meegan Cloughley said.

Most students managed from week to week using a combination of student allowances or student loans, overdrafts, loans and gifts from family and income from part-time work.

But work opportunities dried up quickly in late 2008 when the recession started to bite and despite the recession being officially over, jobs were still difficult to secure.

Those unable to find work were living on about $160 a week (although some students are eligible for an accommodation supplement) - less than the $185 a week unemployment benefit paid to a young single person, the women said.

Some students were still waiting for their first payments five or six weeks into the first semester and needed financial assistance from OPSA to survive, she said.

Living hand to mouth while trying to study was stressful, the women said.

Ms Cloughley said removing the secondary tax classification from students' part-time work would help, as would increasing the amount students could borrow on their student loans for living expenses and increasing the student allowance, which qualifying students do not have to repay.

Ms Geoghegan was also in favour of allowing students to borrow more.

"Students don't have enough money to live on. The amount needed varies, but the issue is costs are going up and up and up ... The amount students can borrow for living expenses needs to be matched to reality. A loan is a loan and if students need to borrow more then they should be allowed to."

The pressure on OUSA's foodbank had forced the organisation to increase the amount it spent on the foodbank this year and decrease the size of parcels distributed so it could help more students, she said.

OUSA was also about to establish a student hardship fund, which would distribute small cash grants of probably $75 per application.

While the number of jobs on offer for students had improved slightly this year, it was still "tough" to find work, Student Job Search senior marketing assistant Triona Reynolds said.

The current unemployment rate for 18- to 24-year-olds was 17.2%, slightly better than the 18.4% recorded in the December quarter.

Otago Chamber of Commerce chief executive John Christie said he was not surprised job opportunities for students were still limited.

Otago employers wanted to do the best by their staff and cut part-time positions, cut overtime, shortened the working week and "got behind the counter themselves" before laying off full-time skilled staff, he said.

"Casual and part-time people are the first to go. Unfortunately, a big proportion of those employees are students."

Even when the economy picked up again, there was a always a time lag between improved profitability and an increase in staff, he said. For that reason, and because of the traditionally quieter employment period over winter, students would likely still find it difficult to find work until at least spring, he said.

But job prospects after that were looking more encouraging, he said.

In the chamber's latest quarterly business confidence survey in March, a majority of business owners expected to hire more staff in the coming months - a reversal of expectations a year ago.

"Whatever job growth there is will be slow, but at least we're not in the negatives now. Expectations are starting to improve."

"Students need to think a little bit more clearly about `How do I find a job; what do I want to do; what skills am I bringing to this [vacancy]?' Because, in a tighter market, employers can obviously be more selective about the individual or individuals they are going to hire."

The careers office offers advice and free seminars to university students and graduates, focusing on full-time, post-graduation career opportunities rather than on part-time or casual work.

Students waiting for the job market to pick up to find a post-graduation job, or expecting to succeed by applying for advertised vacancies, were taking the wrong tack, he said.

"Set goals, network, knock on doors, volunteer, build up your CV. The thing employers will look for is evidence of achievement..."