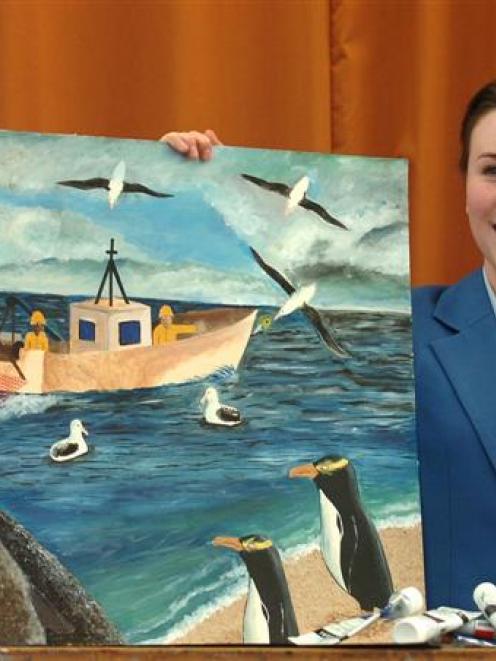 Gemma Baldcock's skill with a paintbrush has made her an artist to watch in the future.
Her work has been sent all over New Zealand and has been exhibited at the Flanders Field Museum in Belgium, but it was the Otago Harbour which inspired Gemma Baldock to create her latest winning masterpiece.

The 13-year-old Queens High School pupil has won the top prize in the intermediate drawing and painting section of the New Zealand Young Designer Awards which she entered earlier this year.

She was also a finalist in the clothing design section of the competition.

For the competition she was given a brief to create an artwork of the Otago Harbour which could be displayed in a local cafe.

"I live out there, so it gave me inspiration," she said.

She also studied Rita Angus, the New Zealand painter, as she worked on her piece during the school holidays.

"She worked very independently on the assignment and showed her initiative," Queens head of visual arts Ngaire Gardner said.

Gemma received her award of $150 and a certificate in Christchurch last month.

Gemma is no stranger to art accolades as she has won numerous local and national art competitions, including having her artwork turned into a postage stamp as part of a New Zealand Post competition in 2006.

She has also spent time at the New Zealand Army base at Burnham and had her work displayed at the Flanders Field Museum to mark the 90th anniversary of the Battle of Passchendaele after winning a New Zealand Defence Force art competition.

People can expect to see a lot more of her as she enters more competitions and makes a name for herself in the art world.