Head for heights not a catwalk essential 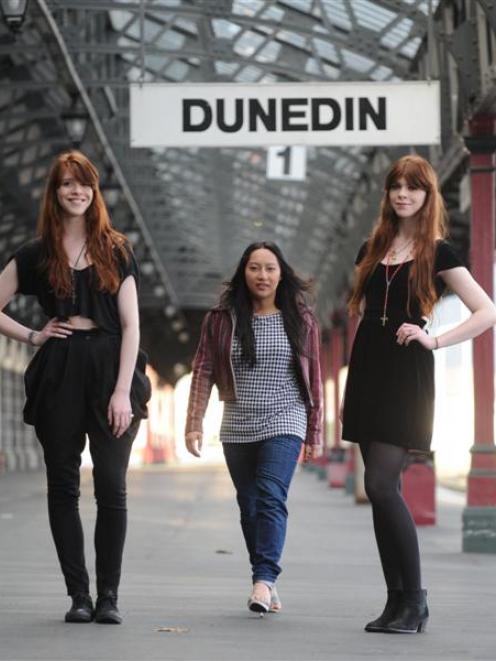 Showing models do not have to be tall is Janna Cachola (centre), of Palmerston, with Nellie (left) and Elza Jenkins, all of AliMcD Agency, at the Dunedin Railway Station. Photo by Peter McIntosh.
Janna Cachola, of Palmerston - all 155cm of her - is out to prove there is more to modelling than height.

The aspiring model, singer and actress took up modelling classes, in secret, earlier this year.

After moving to Palmerston from Auckland in 2009, she turned to modelling out of boredom.

"Moving to Palmerston, it's a change from the social life of Auckland, and I felt like I wanted to get out there and try something new," she said.

The 22-year-old did not want to tell anyone about the classes, at AliMcD Agency, because she thought no-one would believe her because she was short.

However, after being bullied for her small stature all her life, she was ready to use it to make a point and has gained more self-confidence.

"I don't care how short I am. Modelling is not about the height, it's about what you can bring to the table.

"I think everyone has something different to give to the camera and runway."

That attitude and, of course, her looks, recently resulted in her being named "petite model of the week" on US blog Isobella Jade's Petite Modelling Tips.

"I was really stoked. I feel I'm doing something good and increasing people's self-esteem," she said.

She did not expect all petite people to take up modelling, but did want to change the perception of shorter people.

"I want them to be confident about themselves and not be short-minded about their goals."

Despite not being booked for a job yet, Ms Cachola said she would not give up.

She said she was the shortest model on AliMcD's books.

"Everything about the entertainment industry really fascinates me and I just love being in front of crowds.

"With Nellie and Elza, they are amazing people to be coached by, and it's not just looks that brought them to where they are - they are strong-willed."