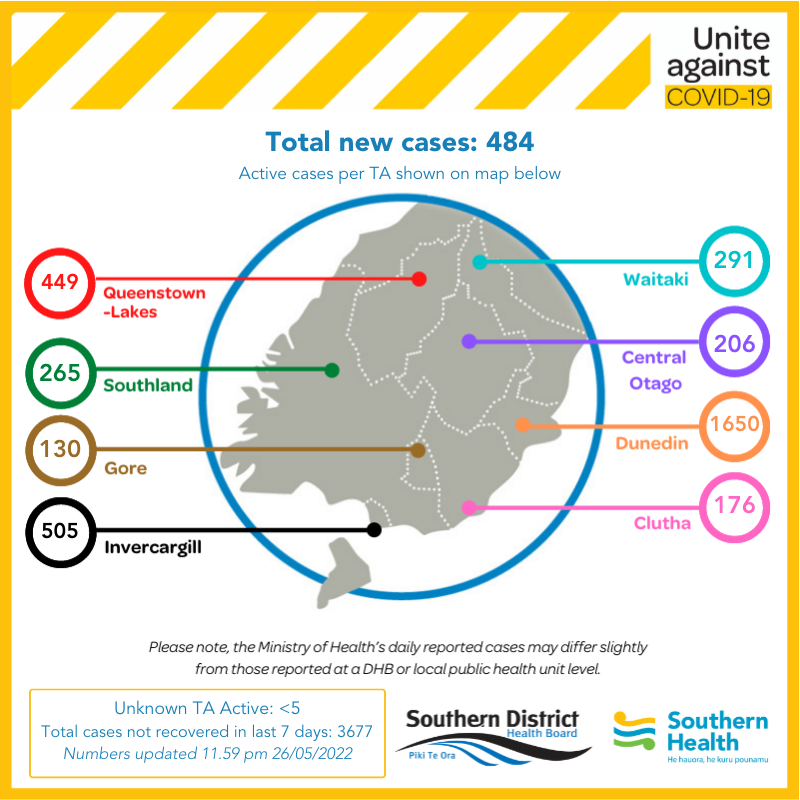 There are 484 new community cases of Covid-19 and two deaths to report in the South.

In a statement, the Ministry of Health said nationally there were 6862 new community cases, 350 current hospitalisations and 25 deaths.

The seven-day rolling average of community case numbers today is 6960 - last Friday, it was 8032.

Of these people, 13 were female and 11 were male. The gender of one person was not reported.

Thirty-four people are in hospital in the Southern DHB region today. Nationally, 10 are in intensive care or a high-dependency unit.

** Wairarapa DHB has not submitted their hospitalisation numbers, therefore yesterday’s numbers are included.

***Yesterday’s hospitalisation numbers for Hutt Valley were reported as 34 in error. The correct number was four. 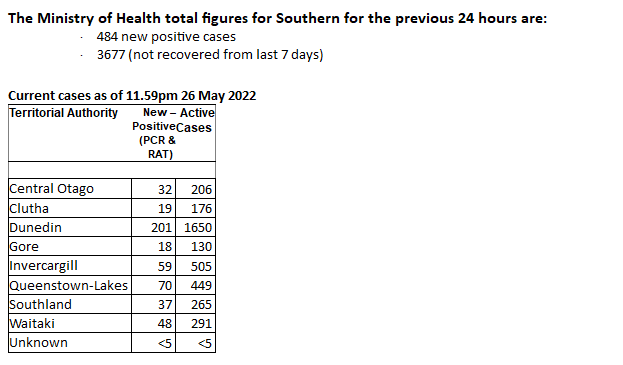 Source: SDHB
Please note, the Ministry of Health’s daily reported cases may differ slightly from those reported at a DHB or local public health unit level. This is because of different reporting cut off times and the assignment of cases between regions, for example when a case is tested outside their usual region of residence. Total numbers will always be the formal daily case tally as reported to the WHO. Due to the increased use of RATs and system lag issues there may be a discrepancy in the number of total active cases from the territorial authority breakdown.
Location of new community cases (PCR & RAT): Northland (234), Auckland (2,292), Waikato (505), Bay of Plenty (193), Lakes (104), Hawke’s Bay (155), MidCentral (214), Whanganui (79), Taranaki (198), Tairāwhiti (30), Wairarapa (57), Capital and Coast (543), Hutt Valley (203), Nelson Marlborough (283), Canterbury (1,078), South Canterbury (148), Southern (484), West Coast (60), Unknown (2).