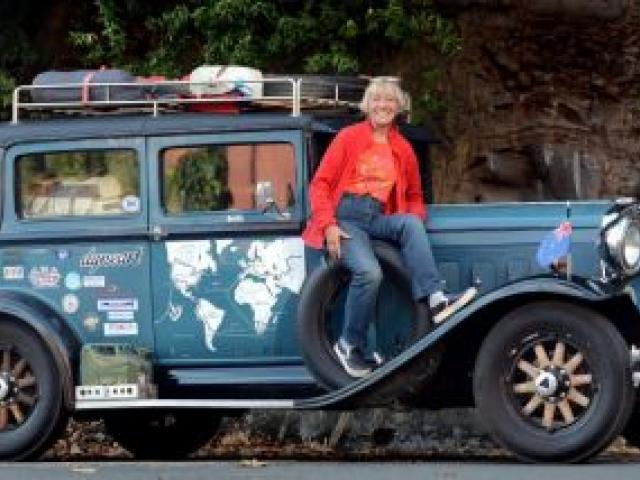 The retired German car dealer, motor mechanic and rally driver from Berlin is attempting to circumnavigate the globe in the Hudson (affectionately called ''Hudo''), and with no heating or air conditioning, she said driving conditions were a little uncomfortable at times.

Mrs Hetzer said the most difficult part was driving over a pass from Kyrgyzstan to China, which reached an altitude of 3750m above sea level.

''It was so cold, the temperature dropped to -21degC. The car was frozen. I couldn't breathe.''

On other parts of the journey, nearer the equator, she felt like she was being roasted inside the car, she said.

''Outside, 35degC. Inside the car, 42degC. The sole from my shoe keeps melting because of the heat from the engine.

''But on the upside, the seats are very comfortable ...''

Mrs Hetzer left the Brandenburg Gate in Berlin on August 1 last year, and has since driven more than 30,000km across Europe, Asia and Australia.

She arrived in Port Chalmers this week, and has already visited several Dunedin tourist sites, including the penguin and albatross colonies.

However, Baldwin St is not on her itinerary.

Despite having a 3.2-litre, eight-cylinder engine that can push the car to a top speed of 96kmh, it was not very good at climbing hills, she said.

The car has had its engine replaced and other parts repaired to keep it on the road.

She planned to travel the length of New Zealand during the next five weeks. The car would be shipped from Auckland to Los Angeles on May 25.

From there, Mrs Hetzer would drive across North and South America and Africa, and hoped to be back at the Brandenburg Gate by June 23 next year, a date with significance.

Mrs Hetzer said it was the date fellow German Clarenore Stinnes - and Swedish cinematographer Carl-Axel Soderstrom - completed the world's first circumnavigation by car between 1927 and 1929.

Mrs Hetzer was passionate about cars and loved to ''drive, drive, drive'', but the most enjoyable part of the trip was the scenery and the people.

''If I go off the road into a garage, it is good because I like to meet the normal people. They are very friendly to me.

''In some countries, they have nothing, but they try to share what little they have with me.''

Mrs Hetzer said she was inspired to make the mammoth journey after retiring two years ago.

''I sold my business and my children said `Mamma, what are you going to do now? You'll die if you don't go to the office'.

"All these years, I was working for my employees, my family, my customers - always working - and now I say, `OK, it's my turn'.''