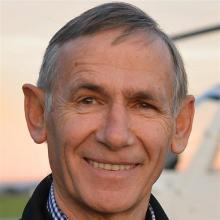 Graeme Gale. Photo: ODT files
A sharp-eyed paramedic may have helped prevent a potential disaster by spotting a drone flying close to the Dunedin Hospital helipad as a helicopter was about to take off.

An Otago Regional Rescue Helicopter pilot, who wished to remain anonymous, said he had just flown a patient and paramedics from the Queenstown area to Dunedin Hospital on Wednesday evening.

At 6.40pm, the helicopter was about to take off for the return flight.

"We were looking towards Lookout Point," the pilot said yesterday.

At that stage, a paramedic already on the helicopter spotted the drone, with a flashing red light, flying about 20m southwest of the helipad and about 5m above it. The pilot was shocked to see the drone flying so close to the helipad.

It was "pretty stupid" the drone had breached Civil Aviation Authority requirements that they not come within 4km of a hospital helipad or aerodrome, he said.

The helicopter’s departure was delayed until the drone flew off.

"I’m just filling out the report to the CAA," he said yesterday.

Asked if he had a message for anyone breaching drone safety rules, he said: "Don’t do it".

Rescue helicopter pilots had a challenging enough job without having to face the consequences of illegal drone flights, which usually could not be seen from the cockpit, he said.

Last night, a police spokesman said they had identified and spoken to the person who flew the drone.

The matter would be referred to Youth Aid, but no charges would be laid.

Southern District Health Board operations general manager Megan Boivin said permission was needed to fly a drone near the hospital.

"The drone was flown without permission, which put the safety of the patient, helicopter crew, hospital staff and the public at risk," she said.

"This situation could have been extremely serious, and it was lucky that there wasn't a collision."

CAA deputy chief executive Dean Winter said it was "disappointing" to hear of the incident.

A Kingsgate Hotel guest said they saw the drone being flown nearby before landing on a balcony of one of the rooms.

The guest informed the hotel of what they saw and contacted police.

Drones should not be sold to people who can't demonstrate a need for them... they are not toys for fools to play with.