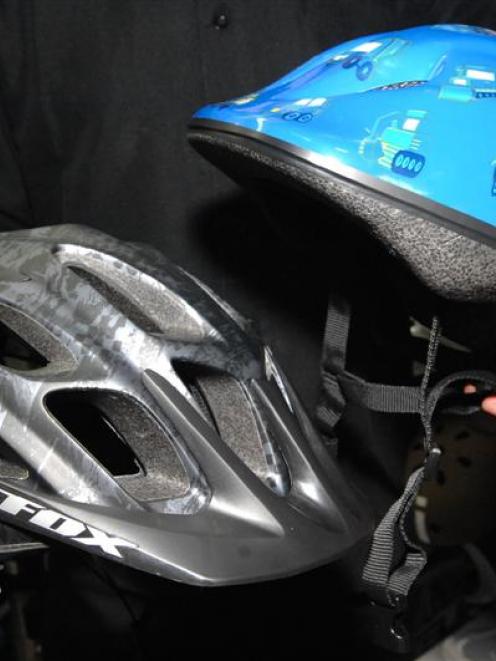 Whether they cost $219 (left) or $59, cycle helmets in New Zealand are required to meet only a single standard. Photo by Linda Robertson.
Southern Region Coroner David Crerar is questioning the way standards are set for New Zealand cycling helmets.

Mr Crerar told an inquest into the death of cyclist David Edward John Hall (29) that a single standard for all cycling helmets "is possibly inappropriate".

In a police crash investigation report to the hearing, Senior Constable Alastair Crosland noted that cycling helmets were only designed to protect riders from low-speed, minor impacts and were tested in 1.4m drops that achieved about 16.2kmh.

Mr Crerar said cycling helmets provided a minimum of protection and he suggested that while a school child on a quiet street might need a helmet offering less protection, someone travelling at speed might require a helmet of a higher standard.

He planned to ask Standards New Zealand to consider having varying standards for cycling helmets.

Mr Crerar found Mr Hall died from severe head injuries received when he fell off his bicycle in Barr St, Mornington, on March 17, 2009.

Karyn Elaine Costello-Hall gave evidence that her husband, an IT professional, had lost 40kg through a weight-loss programme of diet and exercise.

To maintain his fitness, he had begun cycling between his home in Green Island and his job in Dunedin.

"David was a bit of a speeder, in his car and on his bicycle.

"He told me that he really liked speeding down Stuart St and liked passing cars."

She believed it was the first time he had cycled down Barr St.

"David has drifted left and off the road as he exited the right-hand bend.

"He appears to have dropped his bicycle before crashing into the gutter and a lamppost and then into the rear of Andrew Moore's vehicle."

Mr Moore, of Mosgiel, gave evidence that he was sitting in his parked Mitsubishi truck, in Barr St, waiting for his music lesson.

In his mirror, he saw a cyclist approaching.

"He was about 40m away and he appeared to be completely out of control.

"He was travelling very fast for a cyclist. He had his left leg down on the road and was wobbling all over the place."

Mr Moore lost sight of the cyclist and then felt "an almighty bang" at the back of his truck.

He found the cyclist in the gutter and called an ambulance while others, including a registered nurse, tried to resuscitate Mr Hall.

The crash report considered Mr Hall - who was wearing an approved helmet - was travelling about 50kmh when he fell.

He then slid, head first, into the kerb.

Mr Crerar did not consider a "number of defects" with the bicycle would have caused the loss of control.

He noted the front wheel was on backwards and he urged cyclists to ensure their bicycles were well adjusted and maintained.