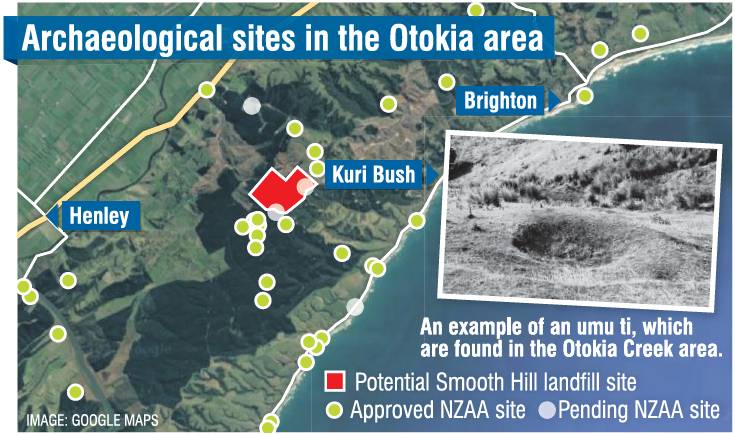 The Otokia archaeological landscape "has been hardly investigated", and its cultural significance should be understood before a proposed landfill at Smooth Hill is pursued, a university researcher says.

University of Otago archaeology PhD candidate Anne-Claire Mauger has worked as a professional archaeologist since 2004 — when she moved to the Brighton area she began to notice the tell-tale signs of a past people’s use of the area.

Southern Maori forays into the backcountry, and along Otokia Creek, were easy to miss but the area was "very significant".

"If archaeological remains are subtle and discreet, they only reflect the way that past tangata whenua interacted with their environment, not because they are not significant," she said.

"Otokia is a critical and unique archaeological landscape, that us, residents of Brighton, would rather try to protect and educate about than witness its degradation, or worse, destruction."

The Dunedin City Council’s proposed location for a new landfill, a Smooth Hill site between Brighton and Dunedin Airport, drew about 120 people to the Brighton Community Hall late last month.

The archaeological record, largely overlooked after the 1980s, showed 10 recorded sites including seven ovens and one major site near the proposed landfill and it should not be discounted, Mrs Mauger said.

The area of the site itself needed to be assessed, but there were two pa sites near the proposed Smooth Hill landfill site - one 6km away, and the other 4.5km.

And a complex of ovens included one umu ti just 80m from the boundary of the proposed Class 1 landfill.

The sugar southern Maori produced was traded with other iwi across New Zealand in "exchange trails" running south to north.

Southern Maori would exchange pounamu, white heron feathers, muttonbird, fragrant oil from speargrass, berries and sugar made in umu ti all the way to the North Island.

The trading increased the mana of local iwi, especially Ngai Tahu, she said.

Otakou kaumatua Edward Ellison said when it was first proposed as an option in the early 1990s, Smooth Hill was Otakou’s favoured landfill site.

Now that the proposal had resurfaced, mana whenua would want to revisit any reports that were done for that site.

An archaeological assessment would need to be done to assess the significance of the area’s artefacts or any potential impact on water quality.

He cautioned against supposing that the sites were not significant because they were less obvious than other sites further north.

"It was quite a different lifestyle, mobile, and they didn’t stay permanently in very many places," he said.

"So you get a different result in the way archaeological sites or remnants of activity occur."

Council waste and environmental solutions group manager Chris Henderson confirmed an archaeological assessment and cultural impact assessment were being prepared as part of investigations into the suitability of the Smooth Hill site.

These assessments would identify any culturally significant sites that could be affected by the proposed landfill.

They would "feed into" the assessment of environmental effects considered as part of any consenting process.

"The [council] is yet to receive the final assessments, but any culturally significant sites identified will be managed appropriately," he said.

Leave this area alone my grandparents owned a farm here spent one week of most of my school holidays here until they retired and moved to town loved roaming the hills around Otokia.