Hit-and-run cyclist told to turn himself in

The family of a toddler whose leg was broken by a cyclist in a hit-and-run is asking the man responsible to turn himself in.

Police yesterday appealed for information about the incident, which left Jaxxyn Scott covered in tyre marks and his leg broken in two places.

The 3-year-old had just finished enjoying a day out at Dunedin's "Dinosaur Park" with aunt Samantha Scott on a sunny Wednesday afternoon.

Ms Scott said they went to leave the St Kilda playground about 1.50pm, when her nephew was knocked over by a man riding his bicycle on the footpath.

"This guy on a push bike came out of nowhere and bowled Jaxxyn completely over ... He went straight down, face down".

After knocking the toddler over, the cyclist unleashed a torrent of abuse before riding off, up John Wilson Ocean Dr, she said. 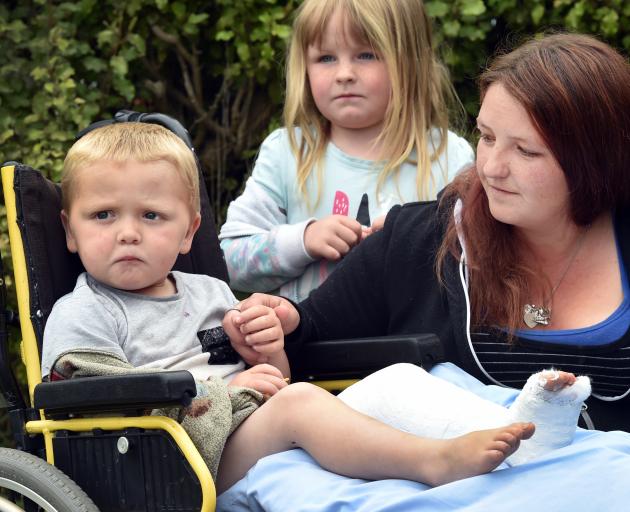 Pictured the day after a cyclist broke his leg in a hit-and-run in Dunedin is Jaxxyn (3), together with sister Hayley (5) and their mum Sonya Scott. The cyclist remained at large last night. PHOTO: PETER MCINTOSH

"He swore at Jaxxyn, called him a little bastard . . . I told him he shouldn't be on the footpath riding a bike anyway."

Ms Scott took her shocked nephew to a GP, where the extent of his injuries became clear.

"They called the ambulance because he looked ... dazed, pale white."

X-rays revealed Jaxxyn's left leg was broken in two places, and he had also suffered head and abdominal injuries.

He spent the night in hospital before being discharged yesterday.

Doctors said his recovery would take six to eight weeks.

Ms Scott had a blunt message for the cyclist.

"Come forward - it's unfair putting a 3-year-old through so much pain."

Acting Sergeant Steven Wykes, of Dunedin, yesterday appealed for sightings of the man, described as between 30 and 40 years old, 170cm-175cm tall, with grey/white hair and a beard of the same colours, wearing an orange/yellow top, orange/brown shorts, white shoes and riding a red/orange mountain bike.

I am very sorry to see this. And sick of cyclists who use FOOTpaths (aka in US as sideWALKS. Let them get on the road and stay there. I see them act as cyclists on the road but then when they come to a crossing controlled by lights they suddenly become 'pedestrians' while still on the bike. I have also seen them cross on a red light--never caught but, if a car did this, some poor driver would be fined. Police do nothing in regard to cyclists and I am sick of it. I hope the person that did this and then acted so rudely is caught.