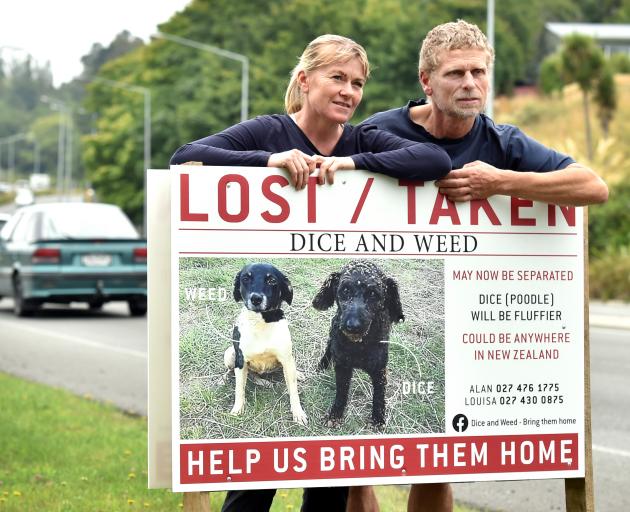 Louisa Andrew and Alan Funnell stand by the sign of their lost dogs yesterday. The sign has been put up beside the busy Caversham Valley Rd. Photo: Peter McIntosh
A hoax caller who claimed to have Alan Funnell and Louisa Andrew’s missing dogs has only made the couple more determined.

The Otago Peninsula couple have been searching for their missing pets — 9-year-old black poodle Dice and 3-year-old fox terrier cross Weed — since their disappearance on October 17 last year.

But far from giving up, the search was only ramping up after four months, Mr Funnell said.

That was despite the pair being targeted by an apparent hoax on Friday, through social media messages and phone calls from a person claiming to know the whereabouts of both dogs, Mr Funnell said.

The initial messages included a picture purporting to be of one of their dogs, Dice.

The couple ended up speaking to the person, who said her name was Lesley, that she lived in South Dunedin and that her uncle had both dogs, Mr Funnell said.

The only reported sighting of the dogs since their disappearance had come in November, when a report emerged of the two dogs tied to the inside of a white van at the Ocean View freedom camping park.

The sighting had led nowhere at the time, but, after making contact on Friday, Lesley had told the couple her uncle also drove a white van and had two dogs with him when she saw him two weeks ago.

The couple were later contacted by a person purporting to be the uncle via social media and he told them he had ‘‘become attached to them, and they were now his dogs, not ours’’.

While there was no specific request for money, the ‘‘uncle’’ later changed his story, saying he had paid $3500 for the dogs, and ‘‘sort of insinuated that money might get him to change his mind’’, Mr Funnell said. The couple asked for photographs of the dogs, but the person refused.

Police were called for advice, and sent a message to the people involved to warn them they were breaking the law, he said.

Attempts to trace the people had proven fruitless, as they used a pre-paid ‘‘burner’’ phone, and the picture of Dice sent to them initially was later found to be a stock photo. Since revealing the hoax online, they had also been contacted by another person who experienced a similar ‘‘found your missing dog’’ approach.

‘‘It’s gutting, absolutely gutting — we lost two of our family. We want to find them and bring things back to normal.’’