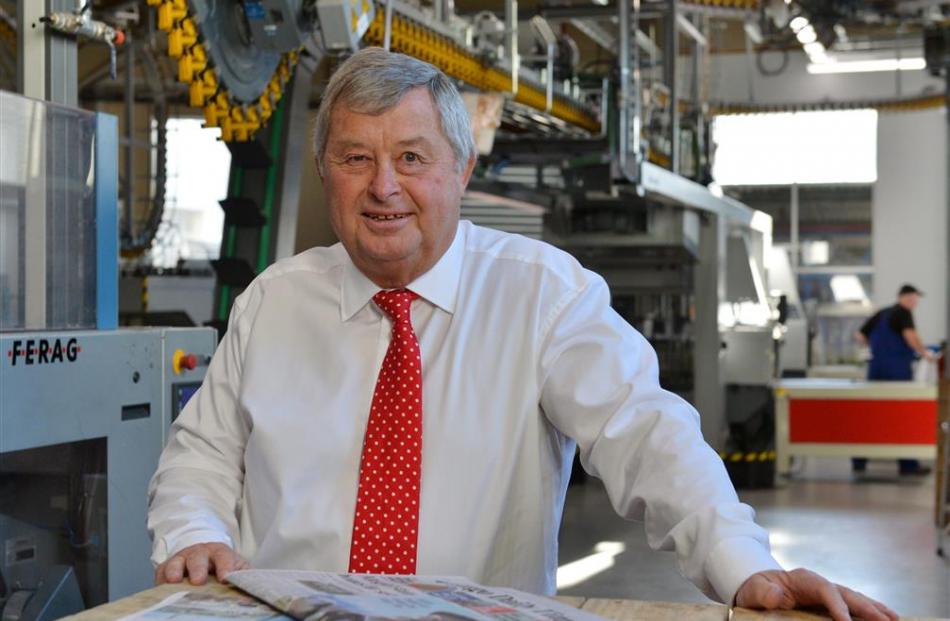 Dunedin's Nick Smith, made an Officer of the New Zealand Order of Merit today, still becomes emotional when he thinks about the people CTV employed in Christchurch who lost their lives in the February 2011 earthquake.

As chairman of CTV, Mr Smith (69) attended a staff meeting on the morning of the earthquake but because he could not get a flight home to Dunedin, he left early to drive back south.

He hurried back to Christchurch to meet surviving staff from the Canterbury regional television station and some of their families.

"I looked at them at the meeting and realised the company can't let down the 15 who lived and the 16 that died. In hindsight, it may have not been the best business decision, but it was the moral thing to not walk away.''

It was important to keep the survivors employed and show the families the company would not walk away.

"We had to show them someone really cared for them in the end, and appreciated what they had contributed to us.''

That attitude ensured CTV was up and running again within 12 weeks, rather than the 10 months some had predicted.

However, it was a trying time attending the funerals of those who died, he said.

The letter advising him of his Queen's Birthday honour came as a complete surprise to Mr Smith and he still does not know who nominated him.

"The letter arrived, I saw ‘Government' on the front and thought perhaps I had another speeding ticket.''

Mr Smith is married to Diana and they have two adult daughters, Charlotte and Gretchen.

Mr Smith has contributed to the media industry for 51 years, having previously worked with the Christchurch Star, the New Zealand Herald, the Dunedin Star and the Otago Daily Times.

He is a director of Allied Press, Greymouth Star Co, and chairman of Star Media Group Christchurch.

He remains chairman of CTV, now run by his daughter Charlotte and her husband, Pier Smulders, and has served on the boards of national media organisations.

He is a life member and past president of the Otago Cricket Association and has had a lifelong involvement with sport as a player, administrator and sponsor.

He relished his sporting contacts, which have lasted even after a forced retirement from active sport due to an ankle injury in 1994.

He played a key role as the driver in forming the University Oval Redevelopment Trust and served on that body as chairman of the fundraising committee.

However, he quickly praised the others involved in the fund-raising campaign, including Allied Press, deflecting attention from himself.

Mr Smith was reluctant to comment on funding he and his family had donated over the years, including sponsoring individual athletes as they tried to make their way internationally.

"There are plenty of others who deserve honours. But if someone puts you up, thinking you deserve it, I am proud to receive it.''

Mr and Mrs Smith and Charlotte are involved in running events for cancer children in Christchurch and fundraising for the Starship Hospital in Auckland.

The Smith family also helps Otago families attend the Christmas children's functions, but Mr Smith admitted it was hard watching the children having so much fun knowing some would not be there next year.

Mrs Smith has donated a media room at Ronald McDonald House, as children from around the South Island use it.

Mr Smith was a director of Radio Otago and is a past president of the Otago Chamber of Commerce and the Dunedin Club.

He is one of a small number of Hon. Captains of the Royal New Zealand Navy, given the rank by Admiral Fred Wilson in 1986 for supporting and entertaining personnel of visiting naval ships.