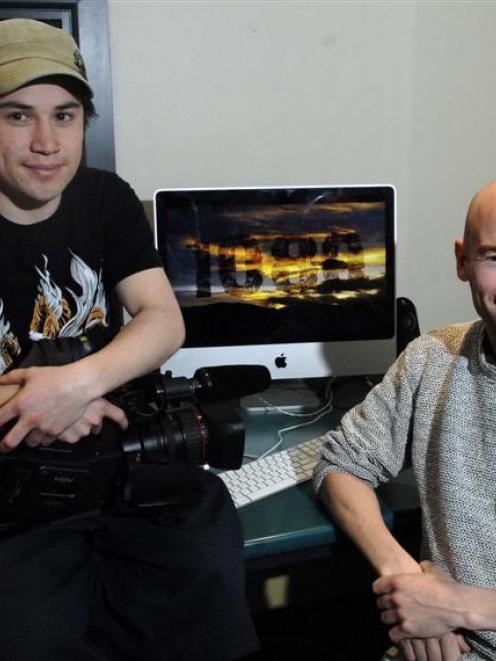 University of Otago masters students Steve Ting (left) and Pete Holmes take a rest after putting the final touches on their documentary on the 1080 debate, which will premiere on Saturday night. Photo by Linda Robertson.
Two University of Otago students hope their documentary on the 1080 debate will encourage people to seek more information on the controversial issue.

Their 25-minute film, A Natural Future, is one of six by University of Otago Science and Natural History Filmmaking students which will be shown this weekend, at Dunedin's Regent Theatre.

Steve Ting and Pete Holmes chose the topic for their masters of science communication thesis because it "ticked all the boxes" of storytelling - it had drama, conflict and emotion.

Mr Holmes said while many films had been made on 1080, they were mostly one-sided, so their aim was to make a "balanced" account of the issue by presenting both sides of the argument alongside the science.

"We wanted the audience to make up their own minds; to go find more information. It's a very emotive subject and some facts get lost in the argument."

While they interviewed 24 people from all parts of the debate, including scientists, a family affected by the death of a dog to 1080, the Department of Conservation and the Animal Health Board, the 24-minute length meant only 10 were able to be included.

"We think we got the emotion and passion across on both sides."

Mr Ting said had been keen to see what the science said about 1080 as there were many myths about the topic.

Having put the film together, Mr Holmes had become frustrated that more work had not been done on an alternative in the past 30 years 1080 had been used, and for Mr Ting it had highlighted the huge divide between the "anti and pro" camps.

For me, the goal is to get people together to talk," Mr Ting said.

A blog site set up while they were putting the film together highlighted that people felt they did not have enough information on the issue, he said.

Saturday's premiere will be the first time the Regent has used high-definition digital projection rather than standard definition film or DVD projection.

Centre for Science Communication director Prof Lloyd Davis said the result promised to make the experience much more absorbing and realistic for the audience.