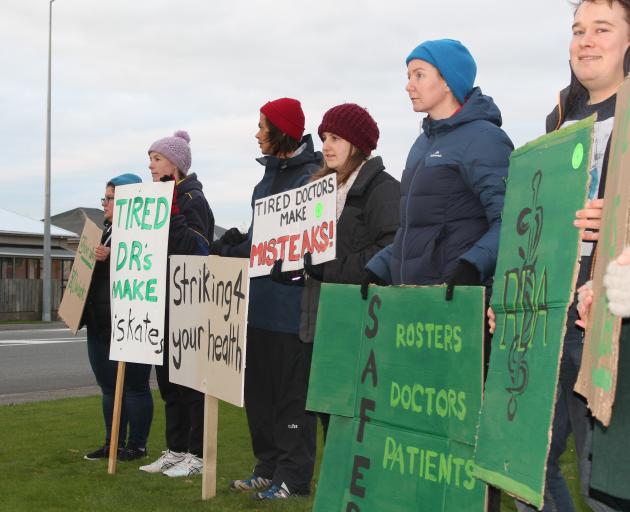 Junior doctors in Invercargill protest outside Southland Hospital as part of a national five day strike. Photo: Laura Smith
Both sides in the resident doctors dispute hope facilitation talks which begin next week can find a resolution to the long-running and increasingly sour employment contract process.

At 8am today a five-day stop-work by members of the Resident Doctors' Association union was due to stop.

The strike, one of the longest by New Zealand medical staff, resulted in hundreds of operations and appointments postponed or cancelled, and cost district health boards hundreds of thousands of dollars in extra payments to senior doctors to cover for their junior colleagues.

The strike followed a series of two-day stop-works and yesterday Southern District Health Board chief executive Chris Fleming said this one had been much harder to cope with,

"The duration of this week's strike has been that much more difficult.

"This has been a challenging week but our clinical and support staff have done an outstanding job of continuing to provide healthcare services."

The SDHB did not have figures available for how many patients appointments were changed, but in previous 48-hour strikes, about 230 procedures had been affected.

In February, SDHB senior medical staff costs were about $1million over budget, a cost the board said was mostly driven by payments for strike cover.

"We greatly appreciate the understanding of the patients and whanau who have had to deal with uncertainty and, in some case, postponements to planned procedures and appointments," Mr Fleming said.

"We will do all we can to reschedule appointments as soon as possible, but please understand it will take time."