Businesses hoping for a swift resolution

By Guy Williams
1 Comment
The postponement of two University of Otago graduation ceremonies after a security threat will have a minimal impact on Dunedin’s economy, provided the culprit is quickly found, business leaders say.

Because most family and friends of graduates were already in the city when news of the threat broke just after 11am yesterday, accommodation and hospitality providers remain confident of a busy few days.

But any prolonged uncertainty could affect what is usually an economic bonanza for Dunedin, they say.

Thousands of people are expected to graduate at seven more graduation ceremonies, for the University of Otago and Otago Polytechnic, in Dunedin over the next 10 days.

Otago Chamber of Commerce chief executive Dougal McGowan said he expected the vast majority of out-of-town visitors to carry on with their plans.

He hoped the uncertainty was quickly resolved so that people felt confident about travelling to the city for upcoming ceremonies.

"We don’t want people to feel unsafe in our city," Mr McGowan said.

Such visitors provided a "huge injection" into the economy, and business owners would be concerned about losing another "lifeline" before Christmas.

"It’s been a hard enough year already without this."

Enterprise Dunedin director John Christie said the economic impact would be "minimal, if any" from yesterday’s postponements. 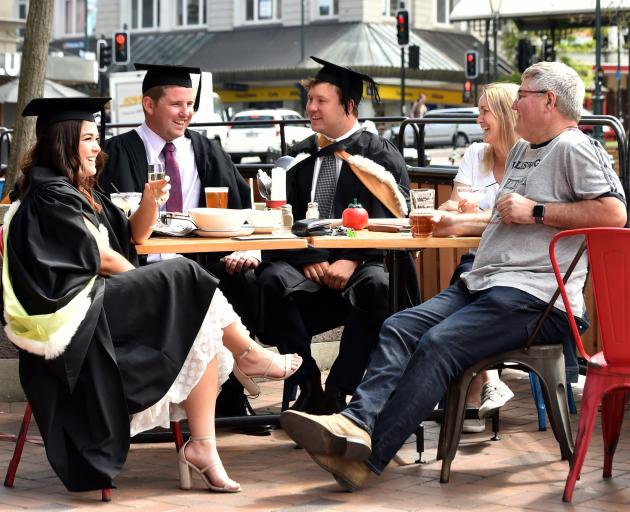 "Most family and friends will want to see their people graduate."

This month’s graduation ceremonies were the "only thing we’ve been looking forward to" after a difficult year.

Therefore, it was vital police nabbed the person who has responsible for the threat, Mr Greenan said.

"Anything like this gets people very, very jumpy at the best of times."

The release on Tuesday of the royal commission of inquiry into the Christchurch mosque attacks would only have heightened people’s sense of insecurity.

"The upshot is, if people stay away, we lose."

"A lot of them have invested a lot of money in hotels and restaurant bookings and so on," Mr Fraser said.

He did not expect the postponements would affect trading over the next couple of days.

Bookings were "really promising" for the next couple of weeks.

Provided the security threat turned out to be a hoax,
he would be surprised if people cancelled their travel plans for the remaining ceremonies this month.

"New Zealanders are pretty resilient about this sort of thing."

Respectfully, the economy is a secondary consideration.