A view along Harrop St showing the proposed five-star hotel flanked by St Paul’s Cathedral and the Municipal Chambers. Image: supplied.
Pleas to "just build it" drowned out howls of protest as the public reacted to Dunedin’s latest five-star hotel bid yesterday.

Readers who emailed the Otago Daily Times yesterday were evenly split between supporters and opponents, as some called for progress while others feared the consequences.

But on Facebook, the ODT’s hotel story attracted 177 "likes" and "loves" by late afternoon, and only five indicating they were "sad" or "angry". 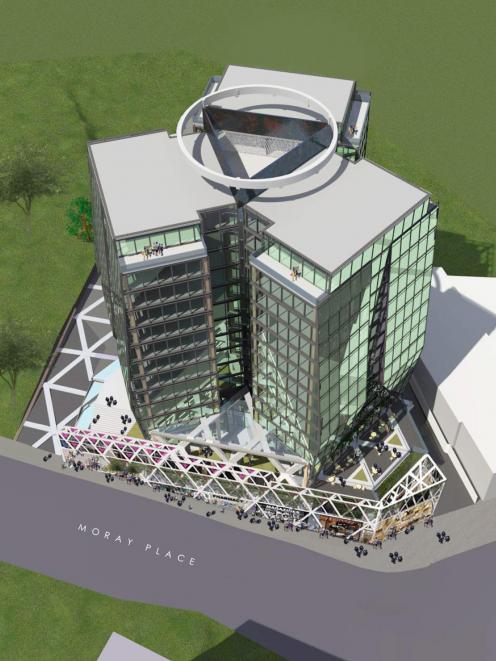 The proposed five-star hotel on Moray Pl.
Comments also heavily favoured the developers, although not without some pointed comments.

Peter Tate was among those calling for progress, saying the city "needs to move forward".

"We need quality accommodation to attract tourists here. We need jobs and money spent in our community. We need to grow. This is all about growth and moving into the tourism future."

Linda Doubleday said the contrast between the new hotel and the city’s heritage buildings would "look fantastic".

"Look what London has done — [it] will not harm Dunedin."

Joan Hamer agreed, saying the hotel would be "absolutely great" and she would "love to see Dunedin progress".

"Going by the artist’s impression, the modern looks fine sitting towering over the ‘old girls’."

Others took a different view, including David Cohen, who said he was not against a new hotel, but did not want "a cheaply built, bland, internationalist box, with no sense of place".

"The image of the hotel ... isn’t encouraging as to aesthetics."

Tony Reid said the hotel "flies in the face" of the city’s desire to be an attractive heritage city, and the focus should be on reusing heritage buildings.

"I find the images of the proposed three-tower hotel appalling to the eye and would absolutely reject such a tower of glass in that heritage part of the city."

Philip Hurring said the hotel needed to be "radically well designed and executed" to avoid the sort of mistakes made in Auckland.

"Dunedin needs a serious new hotel, yes — but it needs to last and stand the tests of time, otherwise it’s just another shoddy concrete and glass future slum."

● Public submissions on the hotel will open tomorrow  and close on May 10, followed by a public hearing before independent commissioners no sooner than July. 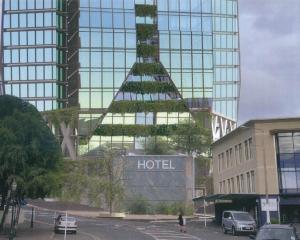