The Dunedin Methodist Mission is planning a $550,000 24/7 housing facility for Dunedin's most vulnerable young people after reports of youth in the city trading sex for a place to sleep.

The proposed facility will be the first of its kind in New Zealand, and house up to eight young people who are in "acute need'' of support from social services.

The mission would aim to transition between 12-24 young people per year from the facility into independent accommodation. 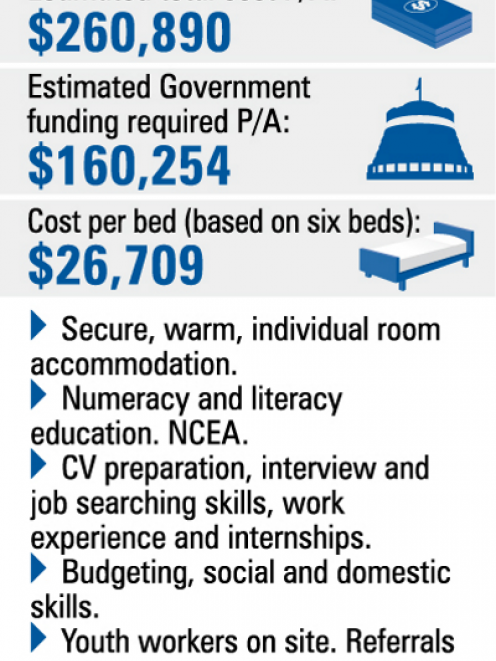 The mission was working with the Ministry of Social Development, in a bid to gain the $160,254 in government funding needed for the facility to be created.

"The Ministry of Social Development are interested in trialling a model like the one we are proposing and they may look to pilot something in the near future.''

He hoped the facility would be open by the end of the year.

"We know, having consulted with other youth providers like Child, Youth and Family, that there will be a waiting list when we first open.

"Sadly, there is going to be more demand than we can handle.

"We would be looking to find those who need it the most, people who are really compromised.''

The facility would be based on the "Foyer'' accommodation model, which had been successfully used in the United Kingdom and United States to assist homeless youth.

Residents would be required to be engaged in approved training, education or employment while living at the facility, but "around-the-clock support'' would be provided to help residents with such activities.

Mr McLauchlan acknowledged such requirements would mean the facility would not be suitable for all at-risk youth.

"It won't eliminate the problem. In the long term we will look to play a preventive role by getting referrals for youth who we can help before they get to the acute phase.''

At present the mission is in discussions with potential corporate partners, which would receive naming/co-branding rights in return for covering an anticipated $10,400 operational expenditure cost and part of the anticipated $550,000 capital cost.

A specific property site was yet to be chosen. However, the Mission hoped the facility would be somewhere "fairly centrally located that is close to bus routes and basic amenities'', Mr McLauchlan said.

"We've got a real opportunity to address the youth homelessness issue in Dunedin if we act quickly.

"We're not asking Government for a great deal, and there are community funders who are ready to step in and meet any shortfalls once sustainable Government funding has been confirmed.''

He could not confirm who the community funders were at this stage.

"It is just a small number that it will help, and of course there is a much larger need, but it does fill part of it.''