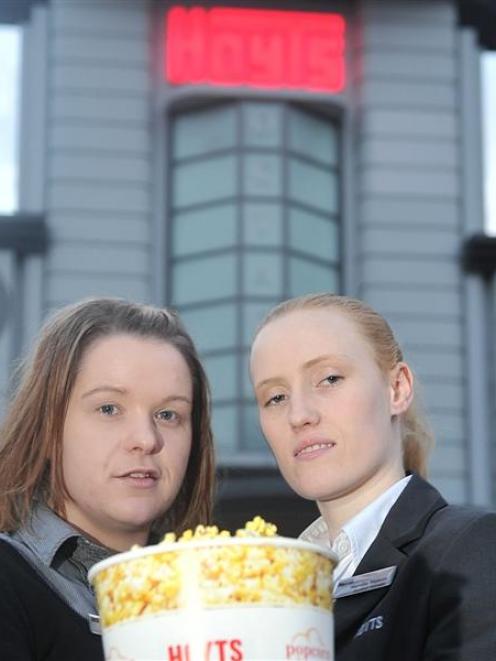 Hoyts Octagon's longest-serving current staff members Aimee Wright (left) and location manager Mandie Watson stand outside the soon-to-be closed cinema. Photo by Craig Baxter.
After 20 years of popcorn and blockbusters, Dunedin's Hoyts cinema is to close next month, with the loss of 35 jobs.

Hoyts' closure, however, does not signal the end of the Octagon site's more than 100-year history as a cinema.

Reading Entertainment is to take over and refurbish the building after Hoyts' lease runs out. Reading hoped to have its cinema open by the beginning of next year.

Hoyts New Zealand general manager of operations Matthew Garelli, of Auckland, said the company was forced to close the cinema because it was unable to negotiate favourable terms before its 20-year lease of the site came up for renewal later this year.

''Regretfully, we are now having to close the premises but we would consider reopening in the future, if we were able to find a viable venue,'' Mr Garelli said.

Most of the cinema's 35 staff, of whom six are full-time, were told about the closure on Thursday. A few senior staff had been told earlier. The staff were upset when told the news, he said.

''They loved the place; they are very passionate about it. They are one of our more enthusiastic crews.''

The closure was not because of a lack of cinema-goers, as the site was profitable on the previous lease terms.

However, the market in Dunedin had not grown for ''quite some time'', while costs continued to increase.

The cinema would close on August 21. Hoyts would then begin work returning the building to its original state - including taking out seats, equipment and the candy bar - which would take about a month.

Reading Entertainment managing director Wayne Smith said, from Melbourne, the company would take over the building in September, when Hoyts' lease ran out.

It would be refitted, including 100% digital cinema technology, and would reopen later this year or early next year.

Reading owns and operates cinemas in Australia and New Zealand and is also involved in real estate development in Australasia and North America and operates off-Broadway live theatres in New York and Chicago.

According to Norman Ledgerwood's book The Heart of a City - The Story of Dunedin's Octagon, the site's history as a cinema goes back to 1911 when it was bought by the Methodist Central Mission. It demolished a previous building and built a hall. The first movies were shown the following year.

Sound track movies were introduced in 1926, and in 1929 ''talkies'' became a permanent fixture.