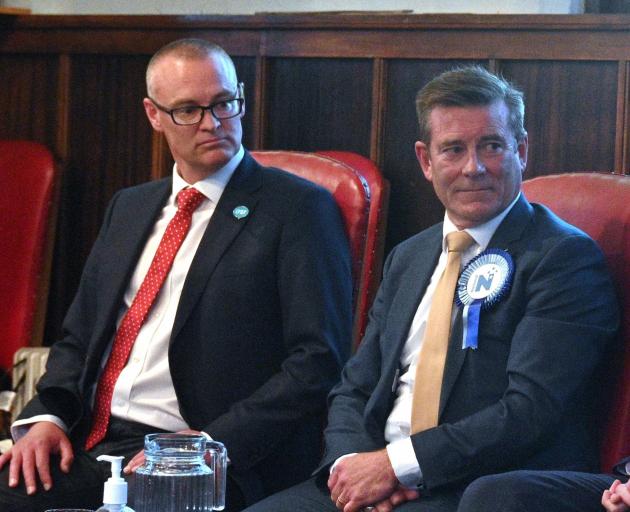 In a tumultuous year, both men lost those jobs in ignominious circumstances, only for each to bounce back by December

When Parliament went into recess, National Party list MP Mr Woodhouse was his party’s new finance co-spokesman, while Labour MP Dr Clark was back in Cabinet.

"It was a challenging year, and humbling at times," Dr Clark said.

"In politics you have to have broad shoulders and if you haven’t you’re not in the right job.

"In other ways, I look back with pride, at things like the Government’s Covid response.

"We are the envy of most of the world and I am proud of the role that I played in that."

Dr Clark resigned from the health portfolio after he and Prime Minister Jacinda Ardern deemed fallout from two breaches of Covid-19 lockdown regulations were too much of a distraction from efforts to keep the disease at bay.

Mr Woodhouse was also a Covid-19 casualty, demoted in the caucus rankings and stripped of his health role after not advising party leadership he had received similar personal information of Covid-19 patients which was publicly released by former Clutha-Southland MP Hamish Walker — a disclosure which ended Mr Walker’s career.

"If I learned anything last year it was that things are always unpredictable," Mr Woodhouse said.

"I’ve learned that I have a much thicker skin than I thought I had, but I guess the main thing was that nothing is sure in politics. It’s a volatile task, and we have to be robust."

Following an election which delivered Mr Woodhouse and his party a staggering rebuff and Dr Clark and his party an unprecedented MMP majority government, each man found himself in a new job.

Mr Woodhouse, as much due to his own abilities as to the devastation wreaked on the National caucus by the election result, was elevated to No4 in the party rankings and handed the hefty responsibilities of finance and transport spokesman and deputy shadow leader of the House.

Dr Clark, meanwhile, was "chuffed"his Labour colleagues voted him back into Cabinet.

Ms Ardern has given him a big workload — commerce and consumer affairs, digital economy and communications, state-owned enterprises, statistics and responsibility for the Earthquake Commission (EQC) — but one which should fit naturally with Dr Clark’s background as a former Treasury official.

"They are areas with some policy heft to them and some interesting challenges ahead," Dr Clark said.

Some work has already begun, Dr Clark having announced a consumer study to assess if New Zealanders are paying a fair price for groceries.

He has also made a proactive offer to policy holders to try to resolve the ongoing Southern Response dispute between quake damage claimants and the Crown.

The EQC will be the focus of one of Dr Clark’s main tasks this year, a rewrite of the legislation governing it.

"The Canterbury and Kaikoura earthquakes were significant events, that legislation had not been looked at for some time, and we need to make sure that it is fit for purpose into the future and that as New Zealanders we are well covered."

Dr Clark expects a busy year in the House, as law reforms are planned in many of his portfolio areas.

He was also keen to advance a "transformation plan" to promote to computer gaming industry.

"The gaming sector also continues to grow, 42% per annum, compounding, it is astonishing, and each job in that sector is worth around $400,000 in exports," he said.

"It’s a very exciting area and one which Dunedin is well-positioned for ... Even a small uplift in activity globally could potentially be worth millions for Dunedin."

Dollars have also been a focus for Mr Woodhouse, specifically regarding how the Government is going to pay back the massive loans it took out to cover the immediate impact of Covid-19 and the recovery from lockdown.

"In simple terms, I’m doing spending and debt and he’s doing everything else ...

"Broadly, my task is to hold the Government to account for the quality of its spending and its plans to repay borrowing."

There was no doubt spending was needed to revive the economy post lockdown, but Mr Woodhouse said he had grave doubts about whether all the pledged money would be spent, and if what was spent would be spent wisely.

"I firmly believe that government needs to be as responsible with your funds as you are, and it seems to me that Covid has been used as a cover for a plethora of other projects and spending initiatives that we are not able to cover through tax revenue.

"As well as that, I don’t think that they will be able to deliver on a lot of those spending promises and my job will be look at spending, overspending and underspending."