'I knew it wasn't going to be good news' 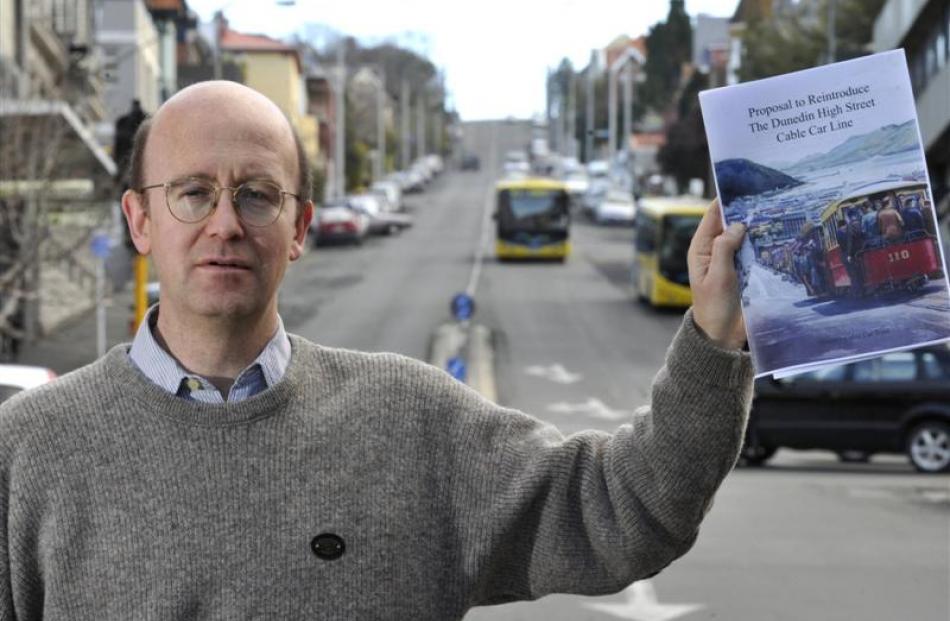 Phil Cole on the campaign to reinstate the High St cable car in this 2011 photo. Photo by Gerard O'Brien.

Life changed for Phil Cole almost a year ago when he was diagnosed with acute myeloid leukaemia. The transportation engineer, frontman of the High St cable car project, council aspirant, devoted family man and despairing Fulham Football Club fan spoke to Hamish McNeilly about the past year.

It was the moment he realised he was mortal.

Phil Cole had been told his acute myeloid leukaemia was terminal.

''It is the point you are not immortal any more; you are mortal. I remember thinking 'I am going to die'.''

In February, he was told he had weeks, possibly months, but certainly less than a year to live.

It all happened so fast.

Last September, the transportation engineer was walking up Stafford St, when ''I stopped halfway and was out of breath but I didn't feel tired''.

''My calf muscles were feeling really heavy, and this isn't right because I'm basically fit.''

He began to nod off at the dinner table, and on another night he went to brush his teeth and blood came out.

That prompted a dental check-up, which later turned into a recommendation for a blood test, as his teeth and gums were fine.

That day he delivered leaflets for his campaign to become a Dunedin city councillor, but when he returned home his wife, Jenny, told him his doctor had advised him to go to hospital straight away.

''I thought bugger, campaign up in smoke before I started,'' he said with typical black humour.

He was admitted to Dunedin Hospital on September 18 last year and the next day was diagnosed with acute myeloid leukaemia.

In the following months, he underwent three courses of chemotherapy, with the view that a bone marrow transplant in about mid-February/March was a possibility.

That transplant would have involved four months in Christchurch.

However, his fourth biopsy revealed the worst.

''They discovered a couple of things wrong with the original leukaemia had gone, but this new one had reappeared.

''All of a sudden, my diagnoses went from going up to Christchurch for a transplant to 'oh, sorry, it's terminal'.

That relief meant he could spend more time with his family, rather than go to Christchurch with only a small chance of making a full recovery.

There was no history of leukaemia in his family, he said.

''It just happens. There is nothing that sets it off.

''It can happen to anyone at any time.''

Putting his diagnosis into perspective was seeing other people experiencing terrible pain during his regular hospital visits for blood transfusions.

''You think to yourself, I have leukaemia, which at the moment has caused me no pain whatsoever and isn't likely to. The general consensus is you just get more and more tired and want to sleep.

''You have more time with your children and your wife ... it is like being in early retirement.''

After the diagnosis, he stopped work so he could spend more time with his family.

Mr Cole emigrated from the United Kingdom in 2002 with Jenny, his wife of the past 17 years, and the pair became New Zealand citizens in 2006.

The couple have two children, aged 6 and 9, who ''have been brilliant''.

''They know that I am not going to be around forever.''

As a transport engineer, he worked in various places around the world, including on the Queensland highways after the devastating floods of 2012.

Mr Cole has featured in the Otago Daily Times in his capacity as chairman of the Dunedin Cable Car Trust, which has plans to reinstate the High St cable car.

The trust was to launch a major fundraiser this year but his diagnosis had ''put everything on hold a bit''.

However, he was still devoting time to the project, with the fundraising drive pushed back to early next year, and he remained optimistic about it.

''There is a lot of support out there.''

He was disappointed his diagnosis meant he could not campaign or feature in any of the Dunedin City Council debates last year.

Those political ambitions are to the fore when he starts talking about council issues, whether it be roading work near his home or his exasperation over the council's inaction over the St Clair seawall.

He had been using his time to write a book for his son and daughter, catching up on paperwork and ''getting everything ready for when I am not here''.

He had also found the time to write two plays, with Last of the Few, inspired by World War 2, possibly being performed at the Playhouse next year.

He also had Hickman line - a catheter used for medication - which limited some of the tasks he could do at home but, thankfully, meant he did not require a lot of injections, ''which I hate''.

Other positives include the dedicated care of Dunedin Hospital nurses, and meeting the England rugby team when it played in the city earlier this year.

He noted the strange looks he got from adults and the questions from children when he donned a surgeon's mask to go outside.

Despite his diagnosis, everything was continuing as normal.

''The strange thing is, you don't have any physical or mental pain.

''Now, it all depends on what happens to the bone marrow cells and I have no control over that, so I don't have to worry.''

''Half the battle is in your mind. If you are told that you are going to die and just accept it, then I probably would have been dead.''

The Fulham Football Club fan noted with typical black humour that ''my illness had coincided with their decline''.

His team had gone from being the beaten finalist in the Uefa Europa League in 2009-10 to being relegated from the Premier League last season and in the bottom of the English Championship now.

''I was diagnosed when Fulham's decline started, so when Fulham starts getting better, then you know I am recovering.''