By Grant Miller and Rebecca Ryan and Daisy Hudson
0 Comments 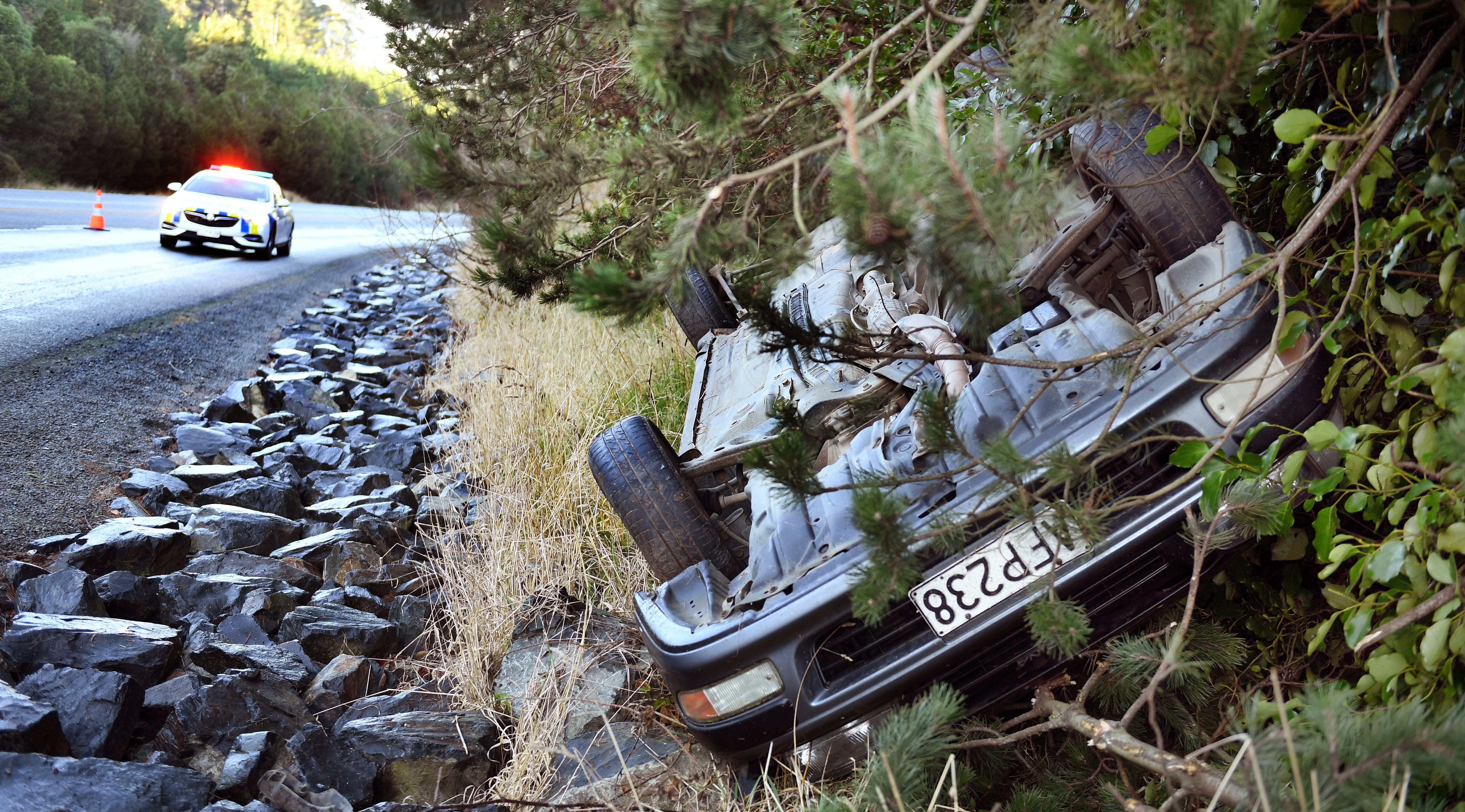 A car rolled on to its roof after coming off the road on State Highway 1, above Evansdale Glen, near Dunedin, yesterday morning. PHOTO: STEPHEN JAQUIERY
Black ice caused problems for motorists in the South but most of the more serious crashes during Queen’s Birthday weekend were further north.

There were multiple crashes in Dunedin yesterday morning but a police spokeswoman said they were minor.

Black ice was believed to be a factor in two of them.

Lindis Pass, near Wanaka, had two crashes on Saturday.

One person was flown to Christchurch Hospital and three were taken by helicopter to Dunedin Hospital.

A motorcyclist suffered a broken leg when he came off his bike in Lindis Pass-Tarras Rd, between Cluden Creek Rd and Phillips Rd.

One person died after a car and cyclist collided in Christchurch on Saturday.

Two people were injured in a crash near the Karangahake Gorge in Waikato on Saturday. One later died from their injuries, police confirmed.

"Traffic was flowing well," he said.

"There were icy conditions [yesterday morning].

"Most motorists handled it very well."

The agency is reminding motorists to drive to the conditions and to be patient.

A car crashed just north of the Ahuriri Bridge, State Highway 8, about 9.15am yesterday.

"[The driver] hit some black ice, careered across the road and straight into the bank," Senior Constable Peter Scott, of Kurow, said.

The 55-year-old driver from Alexandra was not injured.

"People have really got to start being cautious at this time of the year," Snr Const Scott said.

Some motorists were driving too fast, he said.

The first of Dunedin’s crashes yesterday involved a car hitting a barrier on the Southern Motorway about 6.15am. No injuries were reported.

A car went off the road at Waikouaiti-Waitati Rd at 7.40am. There were no injuries but the driver was shaken up, police said.

Two further crashes, one in Coast Rd near Warrington at 9am and another in Russell Rd at Seacliff at 9.30am, were also reported. They were both minor, the police spokeswoman said.

In 2019, there were six fatal crashes during Queen’s Birthday weekend.