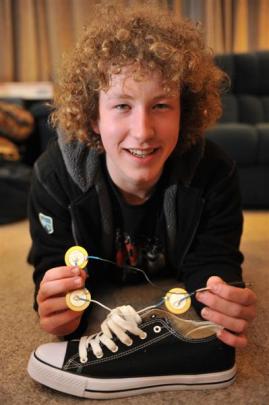 Karl Brinsdon will use a $2000 scholarship to fund his walking-powered cellphone charger concept, one of his many innovations. Photo by Gregor Richardson.

A walking-powered cellphone charger might sound far-fetched, but not to Taieri College pupil Karl Brinsdon.

The 14-year-old, who received the inaugural Nidd Realty Youth Innovation Fund scholarship yesterday, planned to have the device up and running by the beginning of next month.

The innovation, one of many in the pipeline for Karl, would be powered by voltage sent to the charger from discs placed in people's shoes.

The voltage would be generated by the motion of the discs, which would link to the charger with wiring.

''I thought it would be a useful thing,'' Karl said.

''People are getting less fit and using technology a lot more, so I thought it would be a good way for people to be able to charge their phones while out exercising.''

Karl will receive $2000 courtesy of the scholarship, and planned to use it for others' benefit, rather than his own.

Among his other projects to be boosted by the funding was a guitar to be made from rimu he requested be recycled after the recent demolition of a school building.

The guitar would be donated to the school, he said.

The music enthusiast also planned to organise concerts in the Mosgiel area to give fellow musicians an opportunity to perform in front of a live audience.

Karl said it was an opportunity many people in the area missed out on.

''A lot of people don't have a lot of money to go and do a lot of things. With this money, it would be cool to rent a place out and have them round and host them there,'' Karl said.

Karl's mother, Rachel, said the funding would make a huge difference to her son's projects.

''He would have done them, but we always said it's a long-term thing,'' she said.

''With this money he can get on to some of them now, so it's fulfilling dreams really.''

''His innovation was particularly what we were looking for, but he's thinking about other people as well, and that's pretty impressive at that age.''

Mr Nidd said he was driven to create the scholarship after hearing ''too many stories'' of bright young people moving away from Dunedin.

''We wanted to let people know at the grass-roots level there are people who recognise innovation. If we can build a bit of a culture of innovation in this town we might help save a few more young minds from leaving.''