Inclination to walk in Dunedin 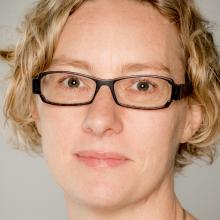 Caroline Shaw.
A new national study highlights the relatively high popularity of walking as a form of transport in Dunedin, and suggests big health benefits would flow from further increasing such exercise.

Official figures cited in the study show that walking or cycling comprised 25% of overall trips taken by Dunedin people, between 2010 and 2013, second only to Wellington (28%) among our main cities.

Dunedin’s walking and cycling activity level for that period was also well ahead of that of four other  cities — Hamilton (13%), Tauranga (15%) Auckland (17%) and Christchurch (21%).

Walking made up a high proportion of the two activities reported in Dunedin for the period.Other figures showed more than 70% of overall trips in Dunedin were undertaken using motor vehicles.

University of Otago graduate and researcher Dr Caroline Shaw is the lead author of the  study, which for the first time benchmarks cycling and walking in six New Zealand cities, including Dunedin.

Dr Shaw, who is a senior research fellow at the university’s Wellington campus, said Dunedin was already a culturally lively place and already had a "really good base" of walking popularity.

If Dunedin continued to "increase its cycling and walking", the city would become "more dynamic and more vibrant", Dr Shaw said in an interview.

Health benefits of increased exercise were wide-ranging and included improving heart health and countering obesity, as well as reducing the risk of cancer and adult-onset diabetes.

She acknowledged that the Otago Regional Council was trying to promote increased use of public transport, including through more direct bus routes, and providing hooks for bicycles on buses.

Such moves could also help encourage more walking and cycling, she said.One of the study’s significant findings was that the weather did not "necessarily influence whether more people cycle or walk".

"Wellington, Christchurch and Dunedin with their colder, wetter and windier climates had the highest levels of people walking and cycling for transport."

She hoped the study would encourage local and regional authorities to support further participation in walking and cycling.

Cities could also use the study to learn from each other and to see what was happening in other cities with higher levels of cycling or walking.

Many young people throughout the world were more interested in walking, cycling and using public transport than in driving a car.

"Cities that provide them with the opportunities to do that are increasingly going to be cities that they want to live in," she said.

The report was funded by the University of Otago and the Resilient Urban Futures programme in the New Zealand Centre for Sustainable Cities.

Over 70% of all trips by motor vehicle, 25% by walking and that leaves 2 - 3 % by pogo stick or bicycle.
Please remind me again how many million DCC have wasted on this very noisy minority? And these people want over $10 million just on a bit between town and Pt Chalmers.
Bike riding in Dunedin will only ever be for the small percentage of people living on the flat. Never for the majority. Stop the waste now.

RUF, Keith. Always like reading you. (Someone used to call me 'Orson'). We can never say biking will never be for the majority. Similarly, if the majority lord it over the minority, that's Tyranny by the majority. The spirit of this not RUF at all story is exercise and physical health. It's not the sort of practice I can afford to deny.

Does anyone know what the acronym YAWN means? It was a legend on Christchurch public benches, placed by the Council.