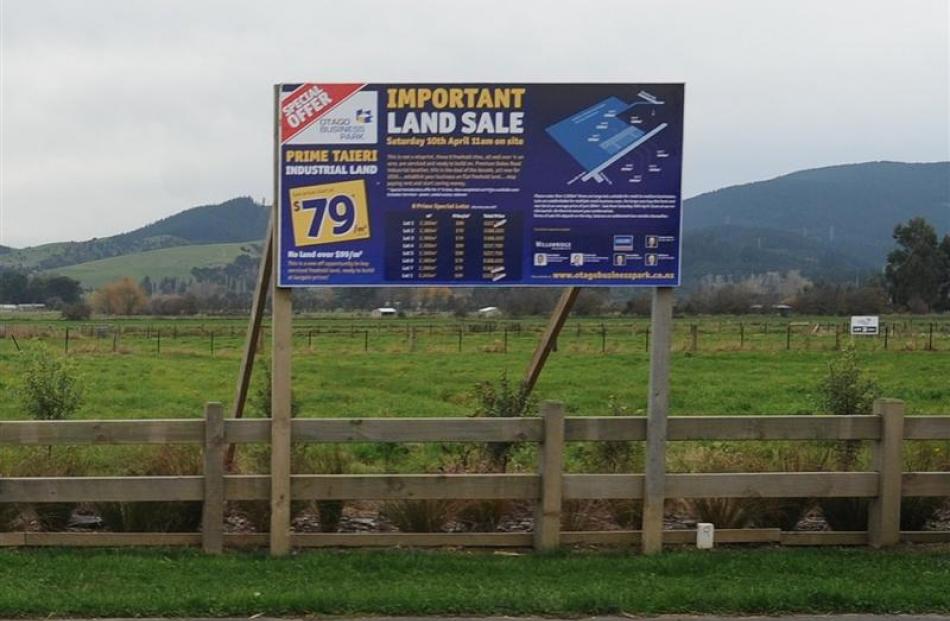 For sale and for lease signs on industrial land on Dukes Rd, near Mosgiel. Photo by Peter McIntosh.

When the Dunedin City Council announced plans to rezone 52ha of land on the Taieri Plain from rural to industrial, it trumpeted the Taieri as a location which would attract new businesses to the city and allow existing companies to expand.

Nine years on, almost all the land remains undeveloped, populated by livestock rather than people.

No development has happened on the 15ha of Dunedin International Airport land rezoned on Centre Rd, opposite the airport car park.

Several new businesses have sprung up on Dukes Rd, North Taieri, including a fertiliser manufacturing plant, a storage facility and a plumbing premises. But most of the new businesses are in the existing industrial area near the Fonterra warehouse (formerly the Fisher and Paykel plant) rather than in the 37ha rezoned area on the north side of the road.

Development has been stalled by the economic recession and other factors, and investment in the area was always going to be a long-term thing, they say.

Brothers Alan and Martin Dippie began advertising sections in their serviced 11ha industrial park two and a-half years ago. Only one has sold.

Mr Dippie said this month he had hoped to have sold three or four sections by now, but there were signs the economy was improving and businesses were again prepared to consider developing on the Taieri.

"There is a bit happening out there now with Fonterra, but I would call it a fledgling industrial area as yet."

Stephen Cairns, of Collier International, which is marketing the Dippies' land, said interest in industrial land in Dunedin had picked up and he expected interest to increase further. The industrial market in Auckland was "reasonably buoyant" again and Dunedin was usually about 18 months behind that city.

"Dunedin is usually last in when there is a downturn and last out when things pick up again." However, the Christchurch earthquake had been a "serious knock" to business confidence, he said.

Real estate agent Tim Barnett, who is marketing several Dukes Rd sections for sale or lease, said he had been involved with three deals in the area last year and was negotiating several more this year.

"It hasn't been all doom and gloom out there ... It boils down to the economy. I expect to see a slow improvement over the next 12 months, but after that I can't say."

"Dukes Rd is a bit problematic because it is not in central Dunedin and because there are some infrastructure issues ... But it is freehold land, which is an attraction. I am sure at some time it will be the right location."

The council had made the right decision to rezone, he said.

"We had a shortage of industrial land in the city. The Taieri land might not be developed yet but we need to take a very long-term perspective on its development."

Asked when development might occur there, Mr Christie predicted there would be "one or two" important developments within five years and "quite significant" development within a decade.

"It is like a rolling snowball. Development attracts development. It takes a little bit of development to get a critical mass from which the momentum gathers."