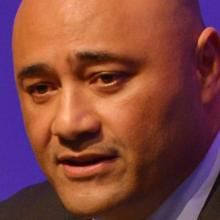 Peseta Sam Lotu-Iiga.
Southern mayors have  been accused of electioneering after hitting out at National’s local government reforms.

The criticism came from Local Government Minister Peseta Sam Lotu-Iiga, after mayors across the South criticised the Better Local Services reforms as an attack on local democracy.

The reforms aimed to encourage the use of council-controlled organisations (CCOs), shared services and amalgamations to improve the efficiency of councils.

But mayors worried the process to introduce the new CCOs, in particular, could strip communities of their assets and rob people of their right to have a say.

Mr Lotu-Iiga, in an interview with the Otago Daily Times, said people needed to be ‘‘careful’’ about using inflammatory language to criticise the reforms.

"We’re in an election period. People are a bit on edge around re-election and I think sometimes politics plays a role in this," Mr Lotu-Iiga said.

The claim was rejected by Dunedin Mayor Dave Cull, who said councils had a responsibility to guard their community’s assets from the threat of an outside takeover without public input.

"You don’t need an election to stand up and be required to say that."

"He’s absolutely off the mark there. Our reaction would have been exactly the same no matter when it was.

"To be perfectly honest, we will get no mileage from the public in criticising this ...  we’ve got nothing to gain from it, other than logic says this is bloody stupid."

The debate came as concern mounted in the South about the impact the reforms could have on local democracy, including the willingness of people to stand for office and vote.

An ODT Insight investigation of the issues found councils across the South, and around the country, were preparing to fight the reforms in the streets, if necessary.

The latest reforms were unveiled in March and remained before a select committee, but were expected to be signed into law within months.

Mr Lotu-Iiga insisted some councils welcomed the proposals, but others appeared to be "conducting what seems to be a campaign" for change.

"There are one or two issues, and I’ve given them an undertaking that we will try and work through some of these issues.

"If there are changes to be made, they need to be made at the appropriate stage."

Perspective is everything. Dave Cull is quite right, but at election time is likely to be condemned by critics for whatever view he espouses. Issues are lost in reflexive response.