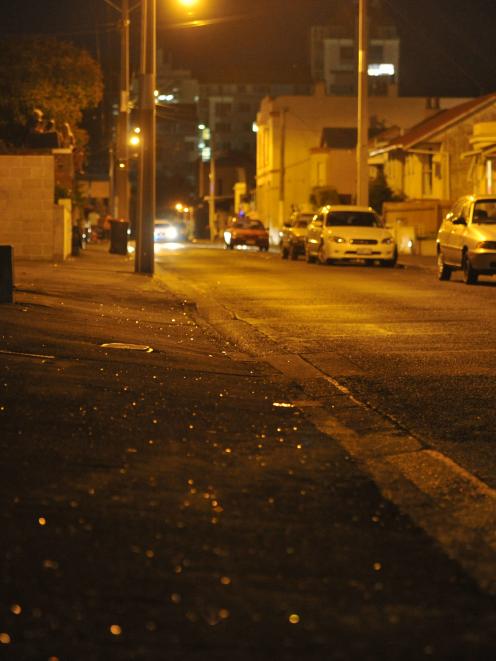 Hyde St was calm and almost deserted last night. Photo by Gregor Richardson.
A second massive student party has been canned after the indicated number of revellers posed a headache for organisers.

More than 2300 people indicated on social media they would be attending the party dubbed ''Fear and Loathing on Hyde'' before the flatmates behind the proposed street party pulled the pin on it yesterday afternoon.

The party, which was to feature DJs, a professional sound system and lighting, was to be held in Hyde St tomorrow night and finish ''when it ends ... or when the cops come'', according to a Facebook page.

But when 2308 people indicated they would be going, the flatmates decided to cancel the street party and move it to a licensed venue.

The annual V flat party, scheduled for last night, was also cancelled after more than 3000 people indicated they would attend.

One of the flatmates behind ''Fear and Loathing on Hyde'', Richard Scott (20), said the decision to move the party to a venue was made after the flatmates realised ''it could end bad''.

The flatmates had planned for four security guards to be present and to fence off the houses, but ''it was looking to be quite a big one''.

The venue that now would house the party allowed about 300 people, but the other 2000 revellers had been warned against visiting Hyde St.

''There will be a lot of people that aren't going to come now that it's at a bar, but they can find another house party to go to,'' Mr Scott said.

The flatmates had been able to organise the massive flat-warming at low cost thanks to ''really good contacts''.

Their decision had been influenced by visits from police, the University of Otago's proctor, the house's landlords and the Otago University Students' Association.

The house's landlord told the Otago Daily Times she was ''happy with the result''.

She described the flatmates as ''nice guys'' but was not impressed with their plans.

''It's been bloody stressful for me,'' she said.

She had been a student and understood the desire to have fun, but ''we wouldn't have lived like this''.

She was supportive of the Hyde St Keg Party, but not large impromptu house parties.

Senior Sergeant Brian Benn said police were aware of the party and the campus constable had been involved.

Police were concerned with parties of that scale because ''at these parties, someone gets carried away''.

He too was pleased with the outcome.

''Maybe we have prevented some damage or people from getting hurt,'' he said.

Additional police would be in the area during the weekend and would be making sure those who intended going to the party did not cause trouble, he said.

''Students planning house parties may want to reconsider if this is the best way to have fun, and whether they are prepared to take responsibly if things get out of hand,'' he said.

''The reckless behaviour of a small percentage of people is tarnishing an otherwise problem-free and fun week.''

Last weekend, Hyde St resembled ''the third world'' after a party of 1000 people led to more than 500kg of glass and trash being left in the street.