It was a cracker New Year (+ video) 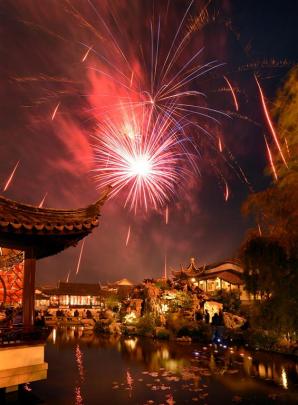 The final flurry of the night’s fireworks display dazzles above the Dunedin Chinese Garden. Photo by Stephen Jaquiery.

If day one is anything to go by, the Year of the Monkey is going to be a good one.

Festivities began about 7pm for a crowd of several hundred at the Octagon.

On the closed central carriageway, dancers dressed in panda and monkey suits entertained while a flat-bed truck hosted drummers and dancers in traditional Chinese dress.

Among it all, a giant gold dancing dragon ducked and weaved above its seven handlers.

At the same time, a similar-sized crowd enjoyed live music, face painting and a dozen food and drink stalls outside the Dunedin Chinese Garden.

When the Octagon performers paraded along Princes and Rattray Sts to the Chinese Garden, the crowds merged and swelled to several thousand.

The dragon danced, firecrackers exploded and hundreds poured into the garden to stroll, sit and take photos.

The stage in the garden's car park hosted several dance and music performances before the night's finale.

As the crowd waited for the fireworks countdown, couples cuddled, children crawled between adult legs while the pandas and monkeys danced with toddlers.

The eight-minute fireworks display finished the night on the best of notes - the crowd giving a rousing round of applause as the last flurry of explosives lit the sky above the garden.