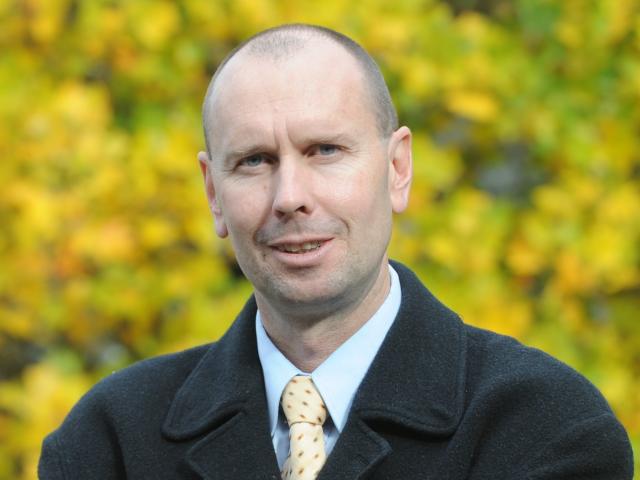 Dougal McGowan.
Dunedin is experiencing the biggest boom in job growth in a decade and that trend is set to continue.

Economic data for the whole of 2016 indicated job growth would continue despite planned cuts to Dunedin's manufacturing and education sectors, he said.

Infometrics' quarterly economic monitor for Dunedin, released this week, showed positive signs across all economic indicators with GDP in the city growing by 2.7% last year and those on jobseeker support dropping by 0.7%.

Of the 575 jobs added to the economy from April 2015 to March 2016, 224 were in the construction sector while agriculture, forestry, fishing, administration and hospitality also experienced growth.

The report from economic analysis and research firm Infometrics also showed the wider Otago economy was performing strongly with GDP outperforming the national average and the unemployment rate at 4.2%.

The numbers in this week's quarterly economic monitor gave a ''preview'' into the projected job growth expected in Dunedin for the current year, Mr Patterson said.

''The sort of numbers we are seeing suggests to me there will be good growth. The past two years have represented the most significant period of job creation in Dunedin since 2005-06.

''The whole Cadbury thing is pretty gutting for those involved and we need to look at ways to support those affected. But it's more of a distraction from Dunedin's good story over the past couple of years.''

He expected the city's growing economy would be placed to offset the anticipated job losses from the manufacturing giant Mondelez and those at the University of Otago. 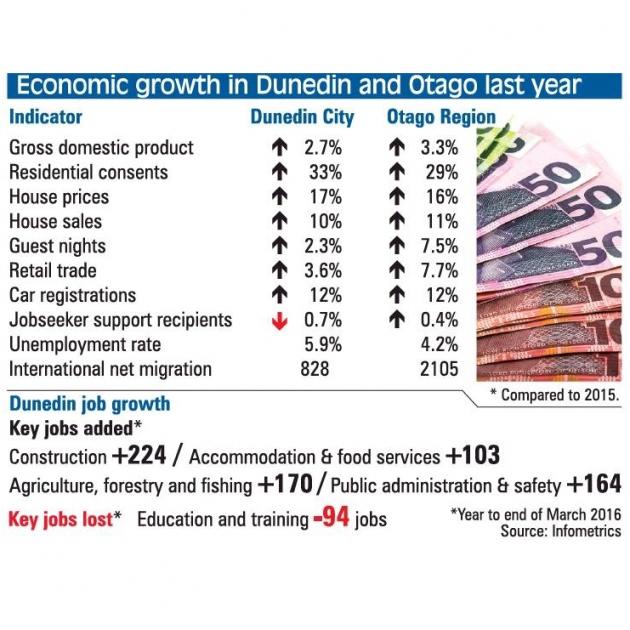 Increases in building consents, house sales and car registrations showed there was ''more money floating around'' and economic confidence in the city.

At the heart of the city's growth is a construction boom with large projects by the university already under way and more in the pipeline.

''If you went around a lot of the employment agencies, none of them would have qualified carpenters on their books any more - those guys have been picked up,'' he said.

''One of the employment agencies in town are looking at bringing Filipino carpenters in to fill a void on the commercial side of things.''

Dunedin Mayor Dave Cull said the good news was not limited to the city's construction sector.

''The growth isn't in one area - it's across the board. In all parts of our economy and in a good part of the community we see a resurgence economically and in confidence.''

The council's own figures showed an increase of about 1800 jobs in the city in the past two years.

''I think it's going to be sustained. I keep hearing of companies, IT companies, business support companies, that are taking on high-skilled professional people in quite high numbers, so I'm quietly confident that trend will continue.''

Growth and confidence had also been felt in more niche areas of the economy such as the arts and heritage rejuvenation.

''A partnership project between property owners, council and developers has seen 19th-century commercial buildings - the sort that have been knocked down and replaced with modern boxes in every other part of New Zealand - refurbished and repurposed to house 21st-century businesses,'' Mr Cull said.

''Many of the businesses in the area are either new businesses or businesses which have experienced significant growth in recent years.''

While he acknowledged the planned closure of Cadbury was a blow to the city, Dunedin was well placed to further ''increase economic opportunities in the city''.

Otago Chamber of Commerce chief executive Dougal McGowan said the Infometrics report was good news and mirrored the confidence business leaders had in the city.

''We have had some quite high-profile closures of some organisations, but the long-term growth pattern is of increasing job numbers.''

In addition to construction, the tourism sector was continuing to grow and the city's overall economic health was having a ''trickle-down effect'' on hospitality and retail.

This week, the chamber hosted a lunch with 12 business leaders from the city.

''They all said there's a really vibrant business environment. There are reasons to be positive for the future,'' he said.

Meanwhile, E Tu Union, not having the time for such stats based speculation, gets on with the job of helping workers facing redundancy.

Unfortunately it is this data that encourages the government to say it simply doesn't matter that Cadbury are closing. What government also don't care about is that few of the people leaving Cadbury have the skill sets to move into job growth areas.

It is nice that a couple of Dunedin based MP's have senior roles in government. It would be nicer if they started using their position to further Dunedin's interests rather than continuing to move jobs and services away.