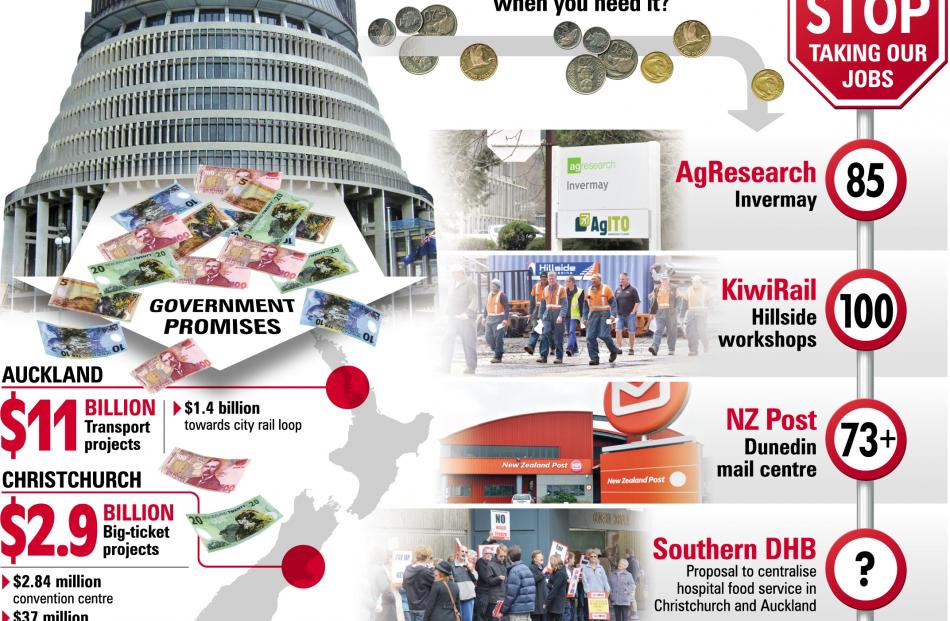 Economic Development Minister Steven Joyce is being urged to review the proposal by AgResearch to cut 85 jobs from Invermay and shift them to either Lincoln or Palmerston North by 2016.

Otago Chamber of Commerce president Peter McIntyre said the proposal was so significant for the region, with three-quarters of current jobs set to shift, that Mr Joyce needed to ensure he was not being ''blindsided'' by AgResearch chief executive Tom Richardson.

And Dunedin Mayor Dave Cull is prepared to lead a delegation of regional ''stakeholders'' to put Mr Joyce ''straight'' on the city's economic and financial situation.

Mr Joyce had picked up the city's economic development strategy - prepared by major stakeholders in the city - and praised it.

The strategy was based on a knowledge economy and aimed to create 10,000 jobs in 10 years, he said.

It was difficult to do that when 85 - many highly skilled - jobs were being lost from the region, the mayor said.

Central Government needed to step back and review its stance on national development over regional development. The answer was not to put everything in Christchurch and Auckland, Mr Cull said.

Mr McIntyre said people with wide-ranging views were approaching him, and the chamber, expressing concern about the latest job losses.

''I think at least the minister should step in and review the decision alongside [Finance Minister] Bill English, since this is very close to him.

''There are a number of highly-qualified staff at Invermay obviously blindsided by the rationale. I think it would be wise and prudent for the minister to review this decision rather than having blind faith in the chief executive.''

Mr English was the MP for Clutha-Southland and Invermay played a large part in the Southland farming sector, Mr McIntyre said.

Otago and Southland had 30% of the nation's sheep flock and 14% of dairy cows. Deer also played a huge part in Invermay's work and in the region.

Servicing the South from Lincoln or Palmerston North made no sense, he said.

Agribusiness and scientific businesses had sprung out of Invermay, making the decision to reduce its operations even more nonsensical.

''We can't afford to lose such a key part of our infrastructure, particularly with its links to the rural sector and the University of Otago.

"Minister Joyce needs to understand we think these cuts are over the top and deeper than they should be.''

Mr Cull said he was prepared to do what it took to make the Government understand that gutting regions was not in the best interests of New Zealand.

Tertiary education was hugely important to the region but it was not about the Government establishing more institutes in Dunedin.

The aim was to build on the research and people already in the city and enhance the economy.

''If they take away the sort of infrastructure and services offered by Invermay, they erode our base and we have nothing to build on. They are stealing our future.''

To have a balanced national community and economy, with distributive capacity, there needed to be vibrant regional centres, he said.

The lesson from the Canterbury and Wellington earthquakes should be not to put everything in two or three major centres.

Recent knocks, such as the closure of Fisher and Paykel Appliances' manufacturing plant and Hillside, were because the world had changed. It was not economic to manufacture a long distance from markets and transport heavy items by road or sea.

However, Dunedin's strength lay in the ''weightless economy'' where services could be provided through the internet.

It needs policies and incentives from governments and local bodies that encourage and support job generation, wealth creation and economic success throughout the country, across all levels of society and at all skill levels.

Three months ago, Economic Development Minister Steven Joyce said that for businesses to succeed, they needed to make the best of their local resources, both physical and human.

''I believe our relationship is in good heart and I know you are not afraid to tell me your thoughts on central government's programme.''

Messrs Key and Joyce can certainly now expect Dunedin Mayor Dave Cull and others to express the thoughts of southerners - hopefully quite forcefully - on the decision by AgResearch to cut Invermay jobs.

When the city is developing an economic strategy, based on a knowledge economy centred on the city's top-quality tertiary institutions and research facilities, it beggars belief a government entity would cut the very foundation of the strategy.

Serious questions must be answered.

They include why AgResearch feels justified in spending $100 million on new facilities when such facilities already exist elsewhere, and when the Government is already borrowing heavily - and having to sell off state-owned assets to help pay down the debt and maintain interest payments.

Finally, one must also ask: when the words of Messrs Key and Joyce are analysed, does what they say match what they do?