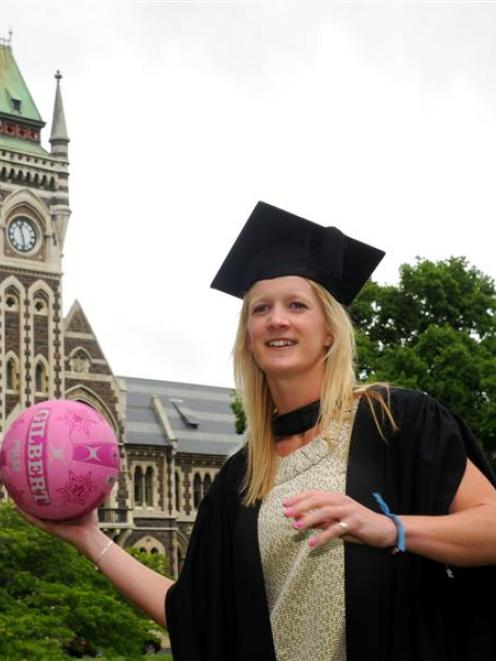 Miss Francois (22), from Motueka, who is also a mid-court player for the Southern Steel netball team, will graduate from the university today with a four-year bachelor of pharmacy degree.

This will bring to an end a great deal of hard work juggling her university studies and the demands of her career as a busy domestic netballer, including playing for Otago, and as an emerging international player of the future.

"It was really hard. I probably didn't have much life other than netball and my studies."

"I'm quite excited and quite proud that I've finished it [the degree]."

In October, she sat two of her final year pharmacy examinations in Adelaide and Sydney in a hotel room and supervised by the Silver Ferns manager. She was in Australia with the Silver Ferns squad playing three tests against the Australian Netball Diamonds.

She took such unusual examination venues in her stride.

"It was quite nice. It's cool. It's probably not quite so stressful as when you're in some exam room with all your peers.

"I was also quite nervous. I didn't study as much as I would normally."

She developed good time management, striving for "that right balance" between always being "switched on" for netball but also well focused on her studies.

Next year, she will complete her pharmacy qualifications by undertaking a year-long internship at a pharmacy in Gore. She is keen to keep working hard, not only in her pharmacy career but also to move off the bench and gain regular court time with the Silver Ferns.

She had a taste of the netball big time when she played in the New Zealand FastNet team in the FastNet world series - a bit like netball's equivalent of cricket's Twenty20 - in Liverpool, England, last year.

It had been "pretty amazing" to be on the court for the first time with leading players such as Irene van Dyke during that event.

Today will also be special: celebrating graduation with family and friends.

And she is grateful her student friends were always "so willing to help".