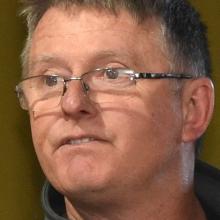 Geoff Lyell.
After months of uncertainty, mail delivery is highly likely to continue at the Karitane store for Karitane residents who wish to collect their mail there.

And residents in the area wishing to use rural delivery will continue to do so.

Community anxieties about a New Zealand Post move to end delivery through the store were highlighted at a packed community protest meeting, attended by 120 people at the township on July 26.

New Zealand Post had earlier announced that the counter mail, a much-appreciated part of life for Karitane locals for many decades, was an "anomaly" that would end on August 15.

But at the July meeting, NZ Post spokesman Murray Rei said the counter post system at Karitane would be given a further three months, while alternatives were considered.

Further dialogue would be co-ordinated by Karitane resident Geoff Lyell.

And concern was voiced by speakers that a forced change for all householders to rural delivery would mean that Karitane people would have to put up rural delivery boxes by the roadsides, and sometimes a distance from their homes.

Delivery box costs, and the loss of community spirit linked to the store mail service, were among other anxieties. Dunedin North MP David Clark said yesterday that a discussion with NZ Post chief executive Brian Roche  indicated that Mr Roche’s understanding was that the postal delivery service for Karitane residents would continue from the Karitane store.

Dr Clark, as the Labour lead on Parliament’s commerce select committee, had asked  about the Karitane service when Mr Roche had appeared at an annual committee hearing on Thursday. Dr Clark had  also attended the earlier protest meeting and had asked Mr Rei for financial figures to justify the proposed move, and said "all the community want to keep" the counter service.

An NZ Post spokeswoman confirmed yesterday that talks had been constructive, but suggested the talks might not yet be formally completed.

And, in any case, NZ Post would like to communicate directly with its customers before discussing an eventual outcome with the news media, she said.

Former Waikouaiti Community Board chairman Gerard Collings yesterday  welcomed the likely outcome, which he believed would be "really good".

And he said congratulations should be given to several parties, including Mr Lyell, who had devoted much of his own time and energy to helping resolve the matter.

Mr Collings said NZ Post had earlier faced "some key business drivers headed in a particular direction" and they "absolutely" deserved credit for their constructive response.