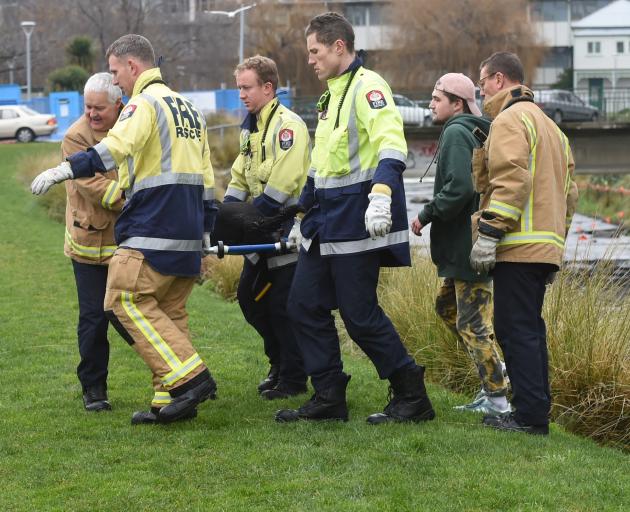 Maku, a 7-year-old black Labrador, was walking yesterday afternoon with owner Cairo Griffin when he slipped from the concrete side wall.

Holly Kendrick, a vet nurse lecturer, was on her way to Otago Polytechnic when her children spotted a fire engine.

''We saw they were dropping some ladders over into the Leith. I popped my head over the wall and saw there was a jolly great big Labrador down there and they were trying to hoist it out on a tarpaulin.''

Maku could then be walked out, rather than lifted.

''I thought that was much more sensible''.

''[It] has only been used for simulation, so it was kind of nice to use it on a real patient,'' Mrs Kendrick said of the stretcher.

Mr Griffin said the veterinarian who assessed Maku believed he had a fractured shoulder.

''They said everything else looks fine.''

Maku was unable to have an X-ray yesterday, because of shock, but would have one today.

Mr Griffin was grateful to Mrs Kendrick for her assistance.

''I jumped up on to the barrier of the Leith wall just to look over it and the dog's just ... followed me.

''When he first fell, he was in shock and was still, but then looked up and started yelping,'' he said.