Landslip left out of Lim 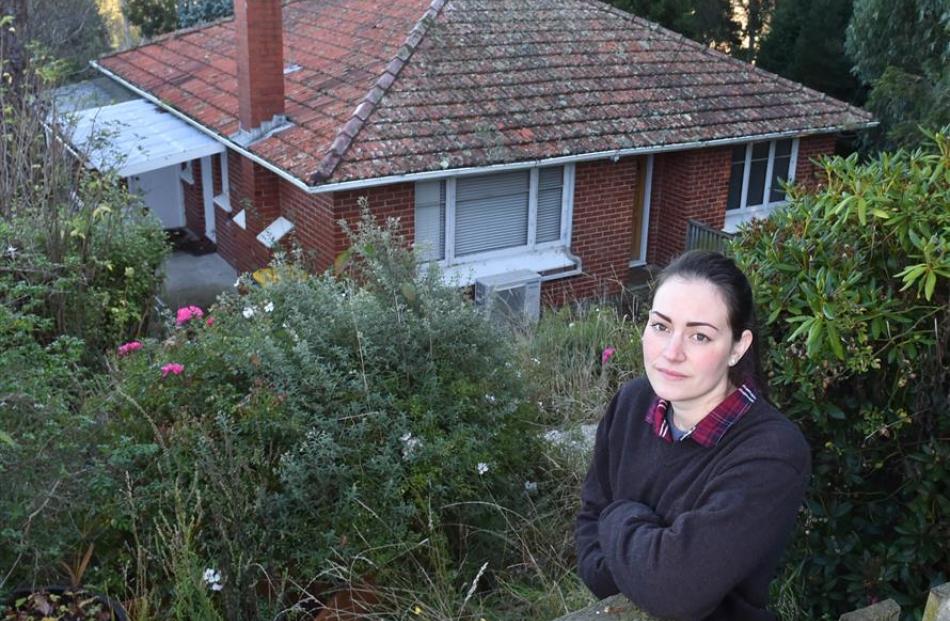 Amanda Bradley outside her house at 36 Torquay St Abbotsford, which is uninhabitable due to land movement. Photo: Gregor Richardson

A young Dunedin couple have been left out of pocket and forced to leave their first home after landslips undermined the foundation and safety of their property.

Amanda Bradley and Rewi Abraham are fighting the Dunedin City Council after landslips eroded the structural integrity of their Torquay St home, in Abbotsford, moving the foundations and opening large cracks in walls.

The couple bought the house, about 1km from the site of the 1979 Abbotsford landslip that destroyed 69 homes, in April 2014.

The couple were aware of the area's history but a land information memorandum (Lim) report, builder's inspection and electrical certificate gave them peace of mind before buying.

However, less than a year later, their front door and a window started sticking and, in February 2015, they were told by a geotechnical consultant to leave immediately because the home was no longer safe.

After leaving, the couple uncovered a 1996 report, funded in part by the council, on heavy rainfall and landslips that affected the "paddock end of Torquay St'' in March 1994.

They also discovered the property was the subject of a previous Earthquake Commission (EQC) claim related to those slips.

Neither the report nor the claim were disclosed in the Lim.

EQC confirmed the property was damaged in 1994 but no settlement was made as the amount was below the insurance excess.

Despite these discoveries, the couple still faces a $844 annual rates bill and the cost of demolishing the now uninhabitable house, Miss Bradley, whose child was 5 months old when they were forced to abandon the home, said.

"We are a young family. It was our first home and we got booted into a hotel and our world fell apart. What do you do?

"It's been flat to flat and we are now living with my parents. We have not had our own possessions in our own home since we moved out.''

The family had received an insurance payout, which allowed them to buy another section and begin building a home but because their policy was GST-inclusive they were left short of the money necessary to demolish the building.

Miss Bradley said she had investigated other ways to demolish the house, including having the Fire Service raze it, but that was not possible because of its location.

Most grating was annual rates bill the couple still had to pay for council services they did not receive.

"There's no water, there's no electricity - there's nothing. Everything is just falling apart.''

The couple had suggested to the council it either take control of the property or exempt them from rates and cover the cost of demolition and maintenance of the section.

Miss Bradley said she felt the suggestions were fair, considering the lack of information about the property's past.

Council corporate services group manager Sandy Graham said the council had no record of a slip affecting the address.

The first the council became aware of the EQC claim was when it was raised by the Otago Daily Times.

The council had no obligation to have the information on its Lim as it had no record of it and because QV had not revalued the property as a result of the slip, Ms Graham said.

However, landslip hazards were generally notified on the report.

In a letter to the couple's lawyer in March, council chief executive Dr Sue Bidrose said the council declined the pair's proposals because the the 1996 report did "not identify the property as being affected by a landslip or that the property is otherwise at risk of instability'' and the council did "not accept ... that the Lim report was incomplete''.

Ms Graham said the council was not "in any form of negotiation'' with the couple and had informed them "that it does not wish to purchase this land, or offer other compensation''.

"Our reading of this 1996 report is that it does not identify a landslip occurring on the subject property at all. Rather, it identifies a slip in the paddock off the end of Torquay St, on an adjacent property from the property in question. The report does not describe an impact on 36 Torquay St.

"There was no previous record of a landslip on this site - therefore no historical information was available to be reported.''

The council asked QV to revalue the property following the 2015 event and was "considering whether a further [rates] remission is warranted''.

"We are sympathetic to the circumstances of this family, but they have received the full benefit of their insurance policy,'' Ms Graham said.

"The DCC has no legal liability or any other responsibility to compensate the owners in this situation. There is no public need or benefit to owning this property.''

EQC said the address was affected by the 1994 rain event and a landslip had caused "minor damage'' to the property.

Miss Bradley also provided an email from QV showing the valuer was aware of the landslip.

EQC acknowledged shortcomings in its initial assessment of the property.

"EQC accepts that its initial assessment of the property was incorrect and the house's occupants were placed at risk - which should have been avoided,'' EQC customer and claims general manager Trish Keith said in an emailed statement.

"Land damage is not always visible upon inspecting a property following a natural disaster.

"Nevertheless, EQC has learned lessons from this case and is taking steps to minimise the risk of this situation reoccurring.

"The customer lodged a claim with EQC in January 2015 for earthquake damage. EQC's initial inspection found the damage to the house to be consistent with earthquake damage and the claim was subsequently assessed on that basis.

"Therefore this initial assessment in January last year did not take land damage into consideration and the extent and seriousness of the situation was missed.

"The customer subsequently contacted an independent geotechnical consultancy to assess the section, concerned about possible land slipping. EQC was notified that significant land damage had occurred and the case was transferred to another EQC assessor, who worked with the consultancy to reassess the property.''

Miss Bradley said the couple intended to continue fighting the council as they felt the information that was not in the Lim would have stopped them from buying the property.

"The DCC was fully aware that this report existed and that it related to all these properties across Dunedin and, in our case, this house but they didn't put that in the Lim report.

"Now we have a property we don't use, we pay rates on, we can't live in and we can't build on because the land is unstable.