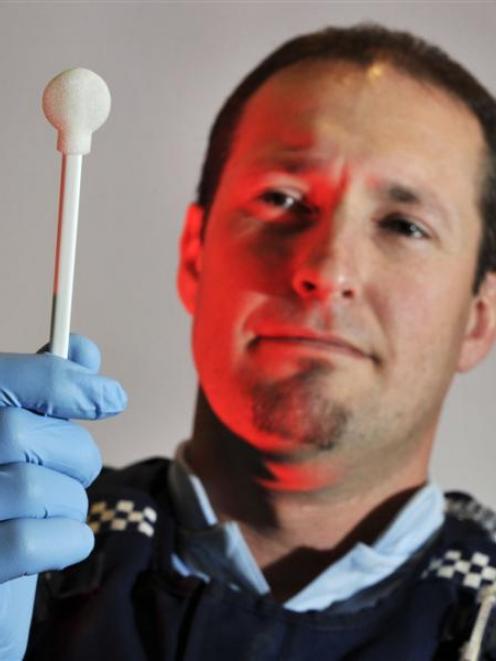 DNAActing Sergeant John Gilbert, of Dunedin, with a swab for collecting DNA samples. Photo by Gerard O'Brien.
Police are welcoming enhancements to crime-fighting technology which will allow them to take more DNA samples from suspected criminals - including youths.

Until now, police could obtain DNA samples from those convicted of relevant offences, those suspected of committing indictable offences, and those who give samples voluntarily.

But under the amendments which came into force yesterday, police may collect DNA samples as they take an offender's fingerprints.

The Act has also been widened to include minor offences that may involve DNA left at the scene and have a link to more serious crime, such as peeping and male assaults female.

Police will also be able to obtain DNA from youths aged 14 to 16 if they intend to charge them with a relevant offence.

Those who gave consent would provide a buccal swab by "brushing their teeth" with a swab.

Those refusing would face an additional charge, and have a blood sample taken by force.

Samples would be sent for testing and stored in the national DNA database, which has 110,000 samples.

Other samples, such as blood or hair recovered from a crime scene, would go into the crime sample database, which by June had 24,000 DNA profiles.

Both databases are managed by the Environmental Science and Research which was ready to process the expected 6000-7000 additional samples a year from the amended legislation, forensic programme manager Dr Jill Vintiner said.

"Up to now about 12,000 individual samples were processed annually.

New robots have been installed for DNA extraction, and software systems have been upgraded to allow for changes in the legislation."

The databank is protected by a range of security features and cannot be accessed by external parties, including police.

Police National forensic services adviser Inspector John Walker said it would not lead to racial profiling, one of the concerns raised by the Maori Party which voted against the Bill.