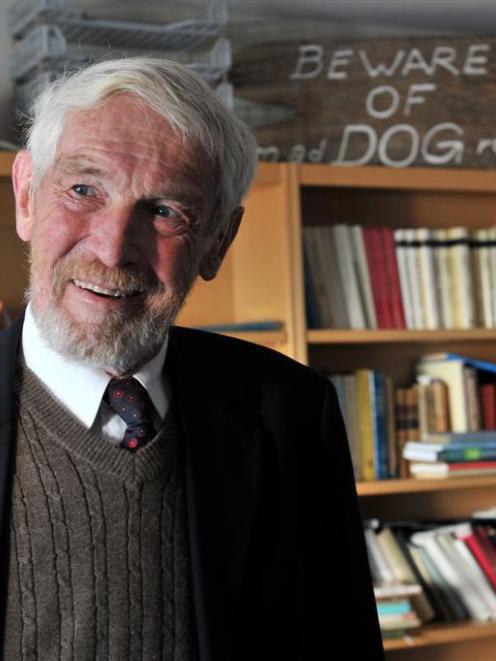 Prof Alan Musgrave said he was speechless after being awarded the University of Otago's highest research honour, the Distinguished Research Medal.

"I was struck dumb when [vice-chancellor] Harlene Hayne rang to tell me. She asked: 'Are you speechless? That's never happened to you before'," he said, chuckling.

"Now, having recovered the power of speech, I can say how delighted I am. I have spent most of my working life at Otago and being recognised in this way means the world to me."

The medal is awarded annually in recognition of outstanding research performance at a high international level.

Prof Musgrave was born in Manchester and completed his PhD at the London School of Economics under the supervision of Sir Karl Popper, regarded as one of the greatest philosophers of science of the 20th century. He later worked as a research assistant for Sir Karl.

He was appointed professor of philosophy at the University of Otago in 1970 and was head of department for 35 years.

"I've only ever lived in three places - Manchester, London and Dunedin," he said.

"I came here in 1970 with a wife and two small children as an absurdly young professor, at the age of 29.

"I was very lucky. I'd only just got my PhD and you wouldn't get a position like that at that young an age now. But it was different back then and there weren't as many people looking for academic positions."

"Teaching isn't a chore. It's a privilege. You have a new bunch of people coming in every year to sit at your feet and listen to what you say. It's a tremendous job."

His sense of humour, like his enthusiasm for teaching, is also undiminished by time. A large wooden sign in his office, made by United States colleagues, reads: "Beware of mad dog realist".

"I thank the university for paying me for over 40 years, partly to write about what interests me. I cannot thank those who gave me research grants, because I have never had a research grant," he said.

"But I have had wonderful colleagues who have helped me over the years by telling me where I was going wrong. They were usually right and I thank them, too."

Prof Musgrave is internationally recognised as an historian of science who has greatly added to the understanding of its development, foundations and importance.

His chief interests are the theory of knowledge and the history and philosophy of science.

He has published dozens of authoritative books and essays, including Common Sense, Science and Scepticism (1992), Essays on Realism and Rationalism (1999) and Secular Sermons: Essays on Science and Philosophy (2009).

A further two books have been published in his honour, consisting of contributions by national and international colleagues.

Last year, the University of Otago also established the Alan Musgrave Masters' Scholarship in Philosophy in recognition of his service and standing.

Prof Hayne said her colleague was an eminent scholar whose contributions to his field had been influential internationally.

"Alan Musgrave has earned a reputation for the clarity and deep insight of his scholarly contributions and for several decades has also been an invaluable leader of philosophical research at Otago," she said.

The medal will be presented to Prof Musgrave at a public lecture which he will give early next year.