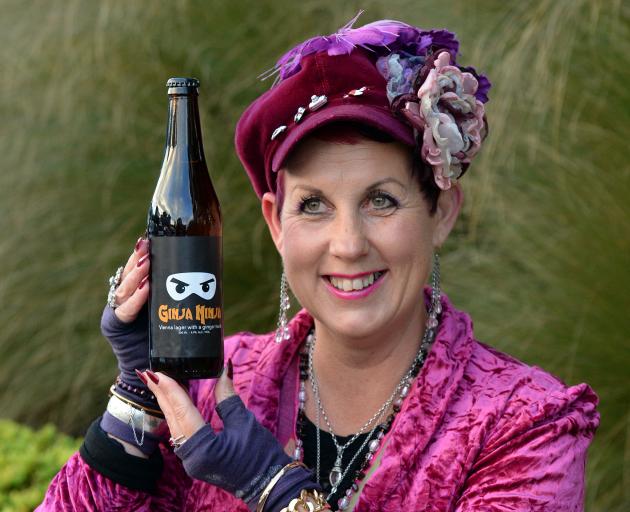 Ginja Ninja, a unique craft beer, is the creative result of a collaboration between the hospice, the Otago Polytechnic and brewer Vicki Yarker-Jones (also known as Vicki Purple).

The traditional Austrian Vienna lager ``with a ginger twist'' will be officially launched at the Hospice Awareness Week's only formal fundraising event, ``Hops for Hospice'', at the Otago Polytechnic Hub on May 20.

Ms Yarker-Jones, who won a silver medal at her first competition in 2010 for a beer she developed specifically for women, says her latest brew, ``a beautiful Vienna lager'' would be ``a Viennese waltz, if it were a dance''.

Ginja Ninja is a limited edition brew, only 450 bottles being available.

``We've used only natural mainland ingredients, and we brewed them at the southernmost brewery in New Zealand, the Catlins Brewery at Kaka Point,'' Ms Yarker-Jones says.

The brew was named Ginja Ninja ``in a nod to ginger's therapeutic properties''.

Ginger was prepared in three different ways (root, syrup and steeped in vodka) to infuse the lager.

Ms Yarker-Jones (44), whose eye-catching and colourful attire encapsulates her personality and enthusiasm, describes herself as ``a gypsy brewer'', as was her husband, Tom Jones.

But her other passions - or ``hats'' - are nursing and Steampunk, as well as the idea of ``giving back''.

She describes the ``Hops for Hospice'' project as ``the perfect marriage between everything I hold dear''.

``The hospice supports our students for work placement and the hospice nurses came up with the particular fundraising idea.

The polytechnic funded the production of the brew and provided the venue for the event, and a polytech design student created the Ginja Ninja label.

``The school of Nursing at Otago Polytechnic, and my own love of brewing: add to that the fact that I survived cancer, and it's the ideal collaboration,'' Ms Yarker-Jones says.

The fundraising event, showcasing her brew, will also feature five other unique craft beers from around Otago.

Each beer has been creatively matched with a specially designed degustation menu which Ms Yarker-Jones says is ``exquisite''.

The hospice needs to raise more than $2million a year to continue delivering essential specialist palliative care services throughout Otago.

Otago Community Hospice chief executive Ginny Green said the hospice was ``delighted'' to be working alongside Ms Yarker-Jones and her ``contagious''enthusiasm.