By Grant Miller
0 Comments
Charges for overdue library books have been dropped by the Dunedin City Council. 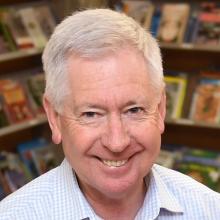 Bernie Hawk
Debt from such charges will also be waived.

Library services manager Bernie Hawke recommended the removal of all charges for overdue library items and city councillors backed the move this week.

Councillors also decided debt relating to late fees that had already been forwarded to debt collection agencies would not be pursued.

Mr Hawke said abolition of late fees internationally and in other New Zealand libraries had resulted in greater use of libraries.

The Dunedin service had already stopped charging people aged under 18 for overdue items and there had been an increase in borrowing.

Dunedin Mayor Aaron Hawkins said this had not resulted in mass hoarding.

The library will still require lost items to be replaced.

There was no evidence late fees were an effective incentive for returning items on time, Mr Hawke said.

Fees that mounted up tended to act as a barrier for people returning books, he said.

If a library user’s total fines exceed $15, the person is barred from borrowing until their balance is paid.

Cr Carmen Houlahan said if abolishing them resulted in one more person reading, the policy would have done its job.

Public Libraries New Zealand is leading a campaign for all of the country’s libraries to remove late charges by 2025.