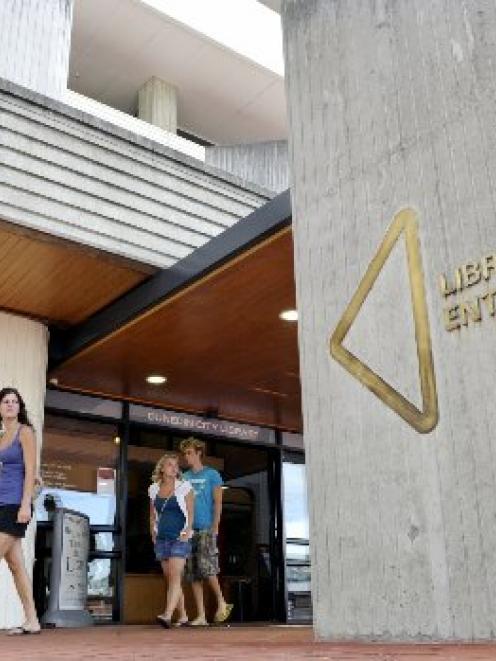 Reduced hours have been suggested to cut costs at the central Dunedin library. Photo by Gerard O'Brien.
A proposal to cut opening hours at Dunedin's central city library would inconvenience more than 35,000 people each year, and could lead to job losses, Dunedin City Council library services manager Bernie Hawke says.

The suggestion has already angered the Dunedin Public Libraries Association, whose president, Merle van de Klundert, described the the proposal to cut evening hours as "wicked".

Mr Hawke told the Otago Daily Times he expected between 12 and 15 staff to be affected by the proposal to reduce the library's opening hours on weekdays.

He could not rule out redundancies as a result, but said it was more likely some staff would have their hours reduced - requiring partial redundancy payments - if the proposal was approved by councillors.

The idea of reduced hours aimed to save $50,000 in annual operating costs, but Mr Hawke said redundancy payments totalling $16,500 would reduce those savings in the 2011-12 financial year.

Bringing the library's closing time forward from 8pm to 6pm on four weekday evenings - excluding Thursdays - would affect 712 people each week, or 35,600 each year, he said.

Ms van de Klundert said the library's opening hours were already less than those in other main centres, and the savings that would be achieved by further reducing hours amounted to "chicken feed".

"I think it's just a wicked step on behalf of the council," she said.

Her association, and others she had spoken to, were all against the move, and Ms van de Klundert planned to speak in opposition to the move at May's public annual plan hearings.

Mr Hawke said it was "inevitable" a reduction in opening hours would have an impact on library visitor numbers, borrowing and participation in library programmes, many of which were run on weekday evenings to make them accessible.

Reduced hours could also affect the library's revenue, by reducing venue hire income from the use of the Dunningham Suite, he said.

However, Mr Hawke told the ODT the suggested cuts were "just a proposal" at this stage, and were for councillors to decide.

"It has come up fairly regularly over the last couple of years, but the council is looking to reduce operating costs and reduce future debt, and all managers have been asked to identify proposals.

"The council has to make the final decision."

Proposed library hours contained in the council's pre-draft 2011-12 annual plan and released to the Otago Daily Times were incorrect.

At present, the central city library is open from 9.30am to 8pm each weekday, and 11am to 4pm on weekends.

The proposal would see the library continue to open at 9.30am on weekday mornings (not 10am as published), but close at 6pm (not 5.30pm as published) from Monday to Wednesday each week, and on Fridays.

Hours would remain unchanged on Thursdays and at weekends.