In limbo, sleeping in car (+ video) 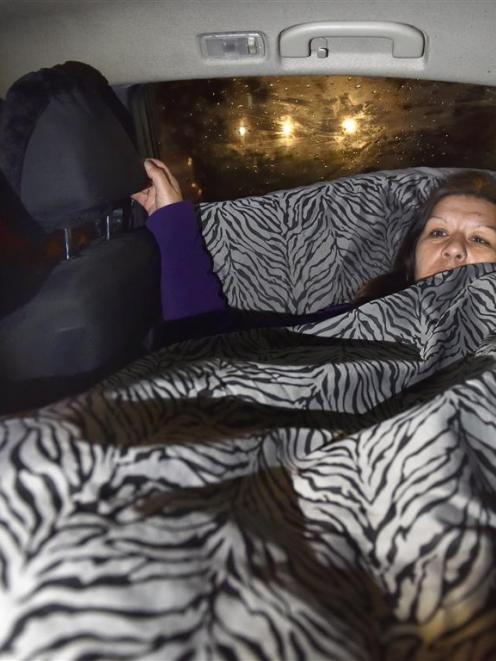 Tina Conway has pointed the finger at Dunedin City Council for her plight after staff repeatedly failed to discover a council mains pipe was leaking water on to her property, causing a bank to slip away in the June 3 Dunedin floods.

It was almost 10 months after the floods and only after the Earthquake Commission (EQC) called in a private engineering company that the council fixed the pipe at the end of March.

By that stage her house, and another house below it, had been deemed unsafe to live in, following a second slip in February.

The property is owned by Ms Conway's former partner and her son. 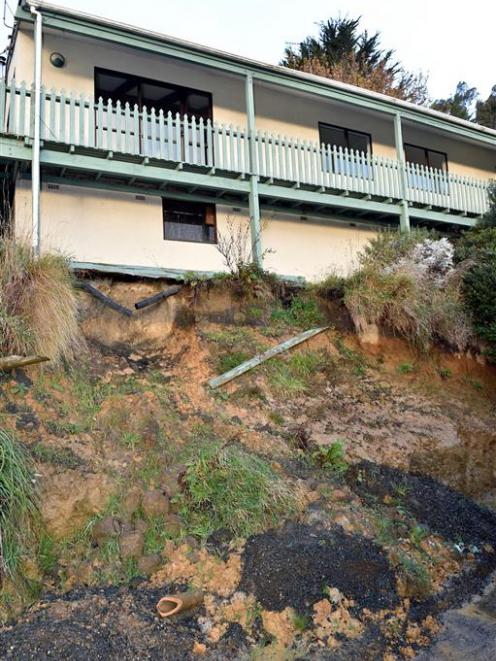 The damaged Green Island house.
Their claim is backed by their insurance company, State Insurance, whose independent loss adjuster wrote to the council in April, holding it liable for damage to land, driveway, footpaths and dwelling.

The council had not accepted lability, which meant Ms Conway's life remained in limbo.

The council yesterday declined to comment on the case in any detail.

General manager infrastructure and networks Ruth Stokes said in a statement: "We realise this is a difficult situation for Ms Conway, however this matter is being dealt with by the DCC's insurers and therefore we cannot make any further comment.''

A spokesman for State Insurance said yesterday it had not received a reply from the council to its "hold liable letter''.

Since her house was deemed by the council to be unsafe in February, Ms Conway had been living in a motel, paid for through her contents insurance, but this week she resorted to sleeping in her car after her insurance cover ran out.

"I can't go home, because no-one can make a decision [about repairing the property] until [the council] accept liability.''

She had to leave her house and stay at a motel for a month after the June slip. She returned, only to have to leave again in February.

The year had been a "nightmare'', but she was staying strong out of ‘‘determination'' for her 9-year-old son, who part-owned the house.

She believed the council was dragging its feet when it came to accepting liability for the damage and she called on it to remedy the situation quickly so she could live again with her son, who was staying at a friend's house.

Dunedin South MP Clare Curran called on the council to act quickly to remedy the situation.

"I would think they had a duty of care to respond urgently and give some certainty and accept the responsibility.''

She was also concerned Ms Conway's case was a symptom of the council's failure to invest in and maintain city's infrastructure.

Ms Conway believed the council would have sorted the problem sooner if she was from a wealthier part of town.

"If I was on Maori Hill, bang, it would be fixed, but this Maori on this hill in Green Island, forget it.''

Ms Conway was worried there was a risk of the house and property being damaged further if a solution was not found soon and had a simple message for the council: "Take responsibility for your stuff-up.''

The council's mistakes started not long after the first slip, when staff failed to find the leaking pipe above the property, despite repeated visits.

"It was obvious it was coming from above, but they kept saying it was a spring.''

She believed the second slip would not have happened and she would be living in her house now if the council found the source of the leak sooner.

Instead, the four-bedroom house was teetering on the edge of a slip, with a wobbly deck and cracks on its rough cast cladding continued to grow.

In the end, it took her working with EQC and her insurance company before the sources of the water running through her property, a leaky council pipe and a faulty valve, were discovered by private engineering company Geosolve.

The report by Geosolve, which has been obtained by the Otago Daily Times, said work needed to remedy the immediate risk caused by the slip included building a 12m long timber pole retaining wall.

Ms Conway was also angry the council had required her to pay for building consent for the retaining wall and continued to charge rates.

She wanted to thank Ms Curran, the tradesmen and engineers who helped her get to the bottom of the problem and staff at Aaron Lodge where she had lived until her insurance cover ran out.

Ms Curran said Ms Conway was not the only person suffering a year on from the floods and she had spoken to Dunedin residents still battling their insurance companies over liability for damage.

"Here we are, a year down the track, and some people still haven't had the work done on their properties because they haven't been able to agree with their insurance companies.''

The situation was a repeat of what happened with insurance delays after the Christchurch earthquakes, but on a smaller scale.

She called on insurance companies to come up with better systems so insurance claims after natural disasters could be resolved more quickly.

"While I can understand why a politician would want to aggressively advocate for constituents, the issues here are complex and the insurers have settled the vast majority of all Dunedin claims.

"Any comparison with Christchurch is ridiculous," Mr Grafton said.