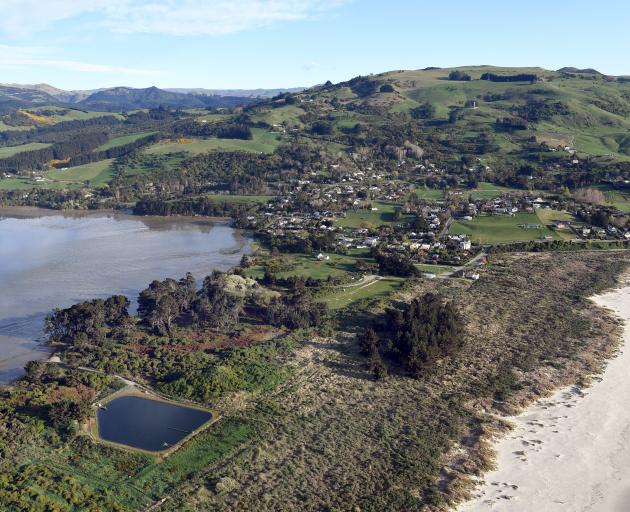 The Warrington wastewater treatment plant pond and discharge field (pictured at bottom left) has been pumping out too much nitrogen, in breach of an Otago Regional Council consent, for years. PHOTO: STEPHEN JAQUIERY
A wastewater plant at Warrington which has been in breach of nitrogen discharge limits for years is in line for a $1.4 million upgrade, the Dunedin City Council says.

The plant at the Warrington reserve has repeatedly failed to comply with nitrogen limits set by an Otago Regional Council resource consent since 2015.

Despite that, the planned upgrade is not set to begin for another two years, when the plant's existing consent expires.

The average of samples taken over a rolling 12-month basis also had to be less than 40mg/L.

However, samples since February 2017 showed neither requirements were being met, although the environmental impact was believed to be "very minor", Ms Moffat confirmed.

However, ORC acting regulatory general manager Peter Winder said the plant had also recorded breaches in the spring and summer months of 2015 and 2016.

The plant's maximum recorded breach - 80mg/L compared with the 55mg/L limit - occurred when limits were initially introduced in 2015, but subsequent breaches had been smaller.

In the last 12 months, the discharge had been below the 55mg/L limit for four months and just above it - by less than 1mg/L - for another five months.

The breaches were more significant - hitting about 60mg/L - for the other three months.

As a result, the DCC has allocated $1.4million in its budget for an upgrade of the plant, to address the problem and upgrade other parts of the plant, but the work was not scheduled to start until 2021-22.

That was about when the plant's existing resource consent was also due to expire.

The plant discharged treated wastewater on to land around the site, which is on the Warrington spit next to Blueskin Bay.

Ecological studies carried out between 2009 and 2014 had shown no impact on the ecology of Blueskin Bay, and an ORC audit in 2017 had deemed the breach was "minor".

The plant was built in 1989 but had not been designed to remove higher levels of nitrogen from the wastewater, meaning the levels coming in to the plant and then being discharged were similar, she said.

The breaches in recent years were believed to reflect higher nitrogen levels in the wastewater stream entering the plant, which could be due to "a range of factors", she said.

Mr Winder said the environmental risks from the breaches were considered low, and the DCC's planned upgrades would address the issue.