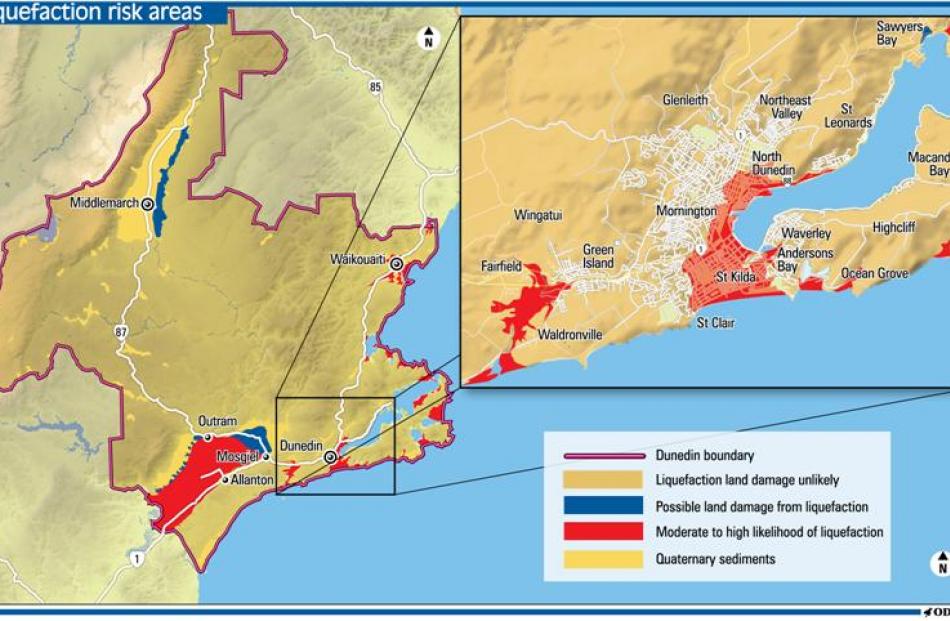 Although more than 90% of Dunedin's land area is not susceptible to liquefaction, a substantial portion of its population and some important commercial, industrial and infrastructural assets sit on land that possibly is, a GNS Science report says.

The report, commissioned by the Otago Regional Council, is the last in a series on natural hazards potentially affecting different areas of Dunedin, done to guide the Dunedin City Council in its development of a new district plan setting the rules and standards for development in the city, and the Otago regional policy statement.

Liquefaction occurs when earthquake shaking causes loose, groundwater-saturated geological materials to lose strength, allowing water, sand and silt from the ground to rise up through cracks and subsidence.

It could cause severe damage to buildings, including breaking foundations, differential settlement of buildings, fracturing pipes and the rise of light buried structures such as tanks.

Using a ''three-fold classification of liquefaction susceptibility'', GNS Science found 55,856 (27% of the city's population) people lived on either poorly consolidated river or stream sediments or marine or estuarine sediments, which are susceptible to liquefaction.

Mosgiel had low to moderate susceptibility to liquefaction, as it was more elevated and located on alluvial (river), rather than marine sediments.

The ORC's director of engineering, hazards and science, Dr Gavin Palmer, noted the new results were different from the previous assessment of liquefaction hazard, done in 2005, which identified almost the entire Taieri Plain as being ''possibly susceptible'' to liquefaction.

The report recommended further work be done to find out how much potentially liquefiable ground there was in the at-risk areas.

''The placing of restrictions on existing or new developments is not justifiable from the information presented in this report.''

Dr Palmer said the need for further targeted assessment of susceptibility within the Dunedin district would be assessed when the 2015-25 long-term plan was being prepared, in consultation with the city council.

The GNS report will be presented to the ORC's technical committee today, with a recommendation it be uploaded to the Otago natural hazards database and provided to the DCC.