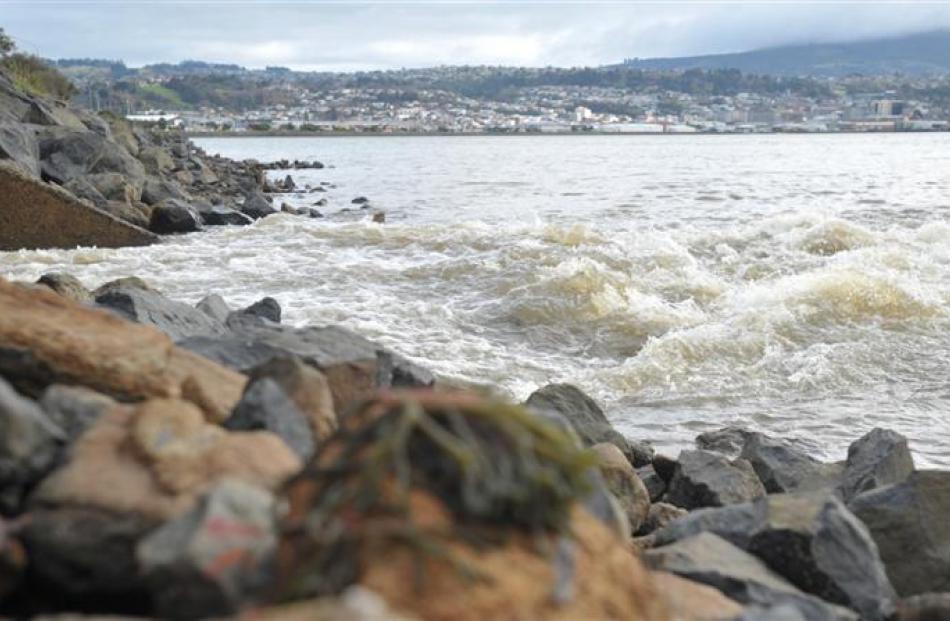 Stormwater pours into Otago Harbour from a Portsmouth Dr outfall on Thursday. Photo by Christine O'Connor.

Dunedin's flood has flushed wastewater, contaminated stormwater and silt into Otago Harbour and out to sea, but the Dunedin City Council says there is no cause for concern.

The flooding that inundated parts of the city also caused wastewater to flow into streets in South Dunedin, before eventually mixing with the stormwater system and being carried to the city's harbour outfalls.

At the same time, a massive volume of floodwater washing across roads had found its way through manhole covers and into the city's sewers, where it was taken to the Tahuna wastewater treatment plant.

As a result, volumes passing through the Tahuna plant by Thursday had spiked to 273,000cu m in a day, or eight times the normal volume, council wastewater treatment manager Chris Henderson said.

The increased volume caused only minor mechanical issues at the plant, thanks to staff who worked long hours, and in some cases through the night, to keep the facility running, he said.

But staff had to resort to only partially treating material before pumping it out to sea, he confirmed.

A power failure on Otago Peninsula also meant some wastewater destined for the Tahuna plant had to be pumped into the harbour, he said.

In both cases, the amount of rainwater already in the wastewater stream meant the discharges were significantly diluted.

The environmental impact was expected to be minimal, but exact levels of E. coli, enterococci, heavy metals and other contaminants would not be known until test results were available in days or weeks, he said.

Despite that, there would be some contamination from even the diluted wastewater, as well as the contaminants picked up by the stormwater on its journey to the harbour and sea, Mr Henderson confirmed.

The worst contamination came at the start of any big rainfall event, when the first rush of water picked up any material on roads or in paddocks, or stuck in gravity sewers, and ''flushed'' it out through the stormwater system, he said.

''It's like someone has pushed a massive flush button out there in the system.

''All of that stuff of course goes into the stormwater drains and gets washed straight into the harbour,'' he said.

However, the material initially flushed through the wastewater network on Wednesday was able to be fully treated at Tahuna and pumped out to sea before volumes picked up, he said.

Dunedin had also been lucky to have experienced recent rainfall, which reduced any environmental impact from Wednesday's flood, he said.

''If you had a month of no rain, and then a big event like this, there would be a significant amount of contamination.''

Monarch Wildlife Cruises owner Neil Harraway told the Otago Daily Times the amount of silt in parts of the harbour on Thursday - the result of clay run-off from land - was the worst he had seen.

It would have an impact on some living organisms, beginning with clams and other filter-feeders, although the signs of that were not yet evident and wildlife would recover, he believed.

Council water and waste services asset and commercial manager Tom Osborn said contaminated stormwater was ''just a fact of stormwater collection'' worldwide, and would be no different this week to that in any other rain event.

It was drawing ''a long bow'' to suggest a one-in-100-year flood would bring with it equally sizeable environmental concerns, although there would be some impact, he said.

''There will have been contaminants entering the harbour, or the rivers, or the sea, as a result, but there is anyway as a result of stormwater.

''The sampling will tell us whether it had an impact of any significance on the environment or not.''